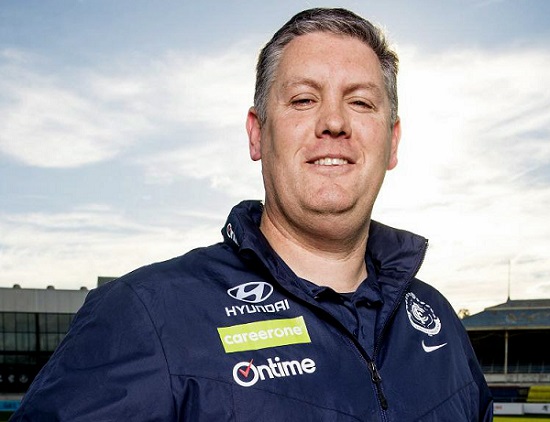 
In June 2016, another significant moment occurred for the Carlton Football Club when the Blues were named as one of eight teams to be included in the inaugural 2017 AFL National Women’s League.

Coinciding with that announcement, the Blues appointed 34 year-old Damien Keeping as coach of the women’s squad. Earlier in the year, Keeping had coached the Western Bulldogs’ women’s team in a high-standard exhibition game against Melbourne, after filling important roles as an assistant coach at the VWFL Women’s Academy, the AFL Victoria Metro Youth Girls Academy, and as senior assistant line coach with the Calder Cannons Under-18 TAC Cup team.

Carlton CEO Steven Trigg said Keeping was a natural choice for the ground-breaking coaching role. “We are delighted to welcome Damien to the Carlton Football Club. His football pedigree meant we collectively felt he was a compelling fit for this role,” he said. “There is a commitment to a full integration between the club’s male and female programs and Damien will work hard across the business to further cultivate the look and feel of the women’s program over the next few months in particular. He will work closely with the club’s current men’s coaching panel, including senior coach Brendon Bolton, and will report to Head of Football Andrew McKay. Damien has the full support of everyone here at the club and we are thrilled he is joining the Blues in this pioneering capacity.”

Club statement: Damien Keeping
Carlton Football Club and AFLW senior coach Damien Keeping have parted ways by mutual agreement. As part of the ongoing review of the AFLW program, Keeping, who assumed the role in June 2016 when the Club was granted an inaugural AFLW licence, acknowledged the time was right to step aside from coaching duties. “I feel very privileged to have coached Carlton’s AFLW team since its inception. It’s been a real honour to coach this playing group and I’ll always be grateful to the Carlton Football Club for the opportunity,” Keeping said. Head of Football Andrew McKay acknowledged the contribution of Keeping throughout his tenure at the Blues. “Damien has clearly played a significant role in the establishment of our AFLW program and its foundation, based on values and a strong culture and we are thankful for his clear investment and passion for the playing group and the program more broadly,” McKay said. “Damien has decided the time is right to explore opportunities elsewhere and we wish him and his family well for their future endeavours.” The Club will commence its recruitment for a replacement over the coming weeks. Keeping was equally as enthusiastic, saying; “It is a real privilege to be part of building a team from the ground up at a proud and historic club like Carlton,” he said. “Carlton’s ‘whole-of-club’ approach, and the learning environment that was presented certainly made this a very attractive opportunity. I am driven by the desire to build pathways for female footballers. We want Carlton to be a destination club for girls and women coming through the system, and will work to build a team that Carlton members and supporters really relate to.” - Carlton Media.