Another "bloke from Hawthorn" takes charge of the Blues. 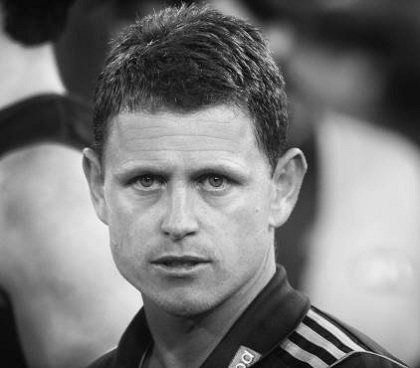 Tasmanian-born Brendon Bolton was appointed the 33rd senior coach of the Carlton Football Club on August 25, 2015 after a thorough selection process. Aged just 36 when the announcement was made, Bolton had been widely regarded as the outstanding candidate for the position after serving Hawthorn with distinction as an assistant coach for five seasons.

Despite never having played at AFL level, Bolton was an outstanding footballer at state level in Tasmania. While still a teenager, he won the Darrell Baldock Medal as Best on Ground for the Northern Bombers (formerly North Launceston) when the Bombers beat Clarence in the 1998 TFL Grand Final. Five years later, at just 24, he was appointed captain-coach of North Hobart. In a remarkable first season, Bolton led the Demons to the 2003 premiership – while also winning the Gorringe Medal as the best player in the competition. In 2006, Bolton took the reins of the Tasmanian Devils during the clubs’ ill-fated foray into the Victorian Football League. Two years later he returned to the TFL as captain-coach of Clarence, where a severe hamstring injury ended his playing career at the age of 29.

Throughout his playing days, Bolton had regularly been employed as a high school physical education instructor. From early on, his reputation as a teaching coach stood him in good stead, and in November 2008 he was recruited by Hawthorn as senior coach of their VFL affiliate, the Box Hill Hawks. In his first season in charge, Box Hill lost an epic Semi-final to Port Melbourne by 4 points. In 2010, the Hawks made the Preliminary Final, only to fall to the eventual Premiers, North Ballarat. Bolton’s two seasons in charge of Box Hill spanned 41 VFL games including finals, with a winning percentage of 63.41%.

Those achievements impressed Hawthorn, and in 2011 Bolton was promoted to the position of assistant coach under Alistair Clarkson. The very next year, Hawthorn lost to Sydney in a pulsating Grand Final, before rebounding to claim back-to-back flags in 2013 and 2014. During his second season under Clarkson, Bolton was given his first opportunity to coach at elite level during the 2013 NAB Challenge pre-season competition, and took the Hawks to an emphatic victory over North Melbourne. His second opportunity came in May, 2014, when Clarkson fell ill and was unable to coach for five weeks. Bolton stepped up and steered the Hawks to five consecutive wins – the only time in Hawthorn’s history that a new coach has achieved this feat.

Almost precisely twelve months later, the Carlton Football Club fell into disarray when senior coach Mick Malthouse was sacked in somewhat messy circumstances. As assistant coach John Barker took over in a caretaker capacity, the club announced that it had appointed a committee to find, assess and recommend the next coach of the Blues.

Almost from that moment Bolton stood out, so there was little surprise when, some three months later, Carlton President Mark LoGiudice and CEO Steven Trigg hosted the press conference that welcomed him to Princes Park.

Bradley celebrating a goal in his 300th game.