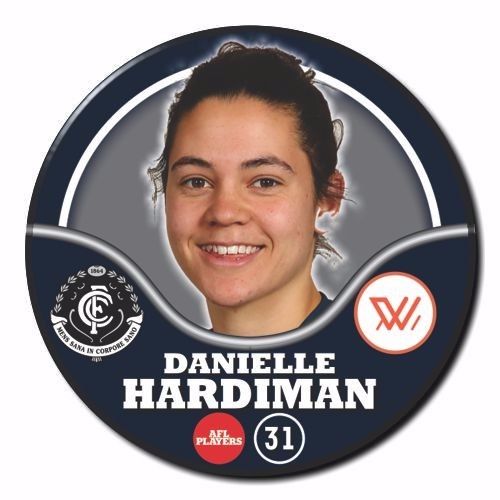 
Danielle Hardiman is a key defender with a strong set of hands – perfect for taking contested marks. After recovering from an injury that hampered the back half of her 2016 VFL season, the No.36 draft pick will be fit and ready to hit the track in 2017. Danielle was a keen sportsperson who played basketball as well as being a State athletics representative in both the relays and 100m events. Senior women’s coach Damien Keeping praised Hardiman’s effective use of the ball. “Danielle’s skills are very good and she always uses the ball well,” Keeping said. “Her ability to read the flight of the ball is instinctive, which sets her a part from others in the competition.” Hardiman will play a key role in shaping the Blues’ defence in 2017.

Hardiman follows in cousin's footsteps
''Danielle Hardiman proved herself to be one of the strongest set of hands in the AFLW last Friday night, with a formidable performance in the backline. Hardiman played a key role for the Blues on the night, keeping Collingwood star forward Mo Hope to one behind in the Blues' 35-point victory. Hardiman grew up watching her cousin Jason Saddington play for Carlton and Sydney, and it was a game she saw her cousin play at the MCG that made her want to give football a shot. “I always wanted to play because I always watched him (Saddington) play, and mum always told me play if you like it,” she said. “To me it was just a boys’ sport, then I saw at this particular match that there was a VIC women’s team and I realised girls could play footy so I signed up and started playing the next year.” "Hardiman went on to excel in football, playing in the Victorian under-18s squads, in the youth girl academies and then at Hallam Sports Academy. It was at Hallam Sports Academy that she met Brett Alexander, one of Carlton’s AFLW assistant coaches, who was able to teach her the importance of being strong in the backline. “He (Brett Alexander) taught me a lot about playing centre-half back, and showed me how to respect it at the same time. You have to try your best but it’s not all about you, it’s about the team.” While she was dominating on the field, Hardiman was unsure about her future and commitment to football. However, when the young defender suffered a knee injury in the last quarter of Melbourne versus Brisbane exhibition game in March of last year, she realised how much she wanted to pursue the game. With the pressures of working full-time as well as training and playing football taking their toll, Hardiman’s commitment started to wane, but seeing her teammates on Whitten Oval during the historic 2016 exhibition game from the sidelines ignited her passion for the game again." “I thought I might not miss it because I’d played for so long and I didn’t know any different,” she said. “When I went down and watched the Melbourne versus Bulldogs game at Whitten Oval I realised I was missing being out there.” Now like her cousin, Jason Saddington who ended his AFL career at Carlton, Hardiman has also been picked up by the mighty Blues. Hardiman was singled out by assistant coach Scott Gowans after the Blues’ opening game against Collingwood for her incredible work in the backline, with her rebounding from the back back 50 particularly pleasing. Hardiman is hoping to continue her strong defensive form when the Blues take on the Giants on Saturday at Ikon Park. “We’ll keep training hard. They could be the best team, we don't know. We took every quarter (on Friday) like the scoreboard was still 0-0 so we’ll do that again with GWS and come out strongly.”' - By Lucy Watkin, Carlton Media February 8 2017

Hardiman succumbs to syndesmosis
Key defender Danielle Hardiman has been ruled out for the last game of the AFLW season after suffering a syndesmosis injury in the Blues’ match against Fremantle on Friday night. Hardiman underwent surgery earlier this week and senior coach Damien Keeping said the Blues would look to welcome back the 22-year-old in their AFLW 2018 campaign. “She was operated on yesterday and all went well. She won’t play this week but we’re eager for her return and we look forward to seeing what she can offer the Club in season 2018,” Keeping said. “Danielle should be really proud of what she has achieved this year on an individual level. She came into the Club highly regarded but she has taken her game to a new level this year. "Intercept marking and her communication within the backline has been exceptional – she would clearly be in All-Australian contention based on her performances so far.” - Carlton Media March 15, 2017

Hardiman, Gillespie-Jones depart
Carlton Football Club would like to thank Danielle Hardiman and Kate Gillespie-Jones for their contribution to the Blues’ AFL Women’s program. As foundation players of the Club’s inaugural AFLW side, the pair were recruited by Carlton via the 2016 national women’s draft. Runner-up in the Blues’ 2017 best and fairest, Hardiman played 12 games over her two seasons at the Club, while Gillespie-Jones notched up 13 appearances in the navy blue. Head of Football Andrew McKay thanked the pair for their services and wished them well as they continue their career at North Melbourne. “On behalf of the Carlton Football Club I’d like to thank Danielle and Kate for their dedication and commitment to our women’s program throughout their time at the Blues,” McKay said. “As foundation players of our AFLW team we appreciate the role they played over the past two years and wish them all the best for the future.” - Carlton Media.