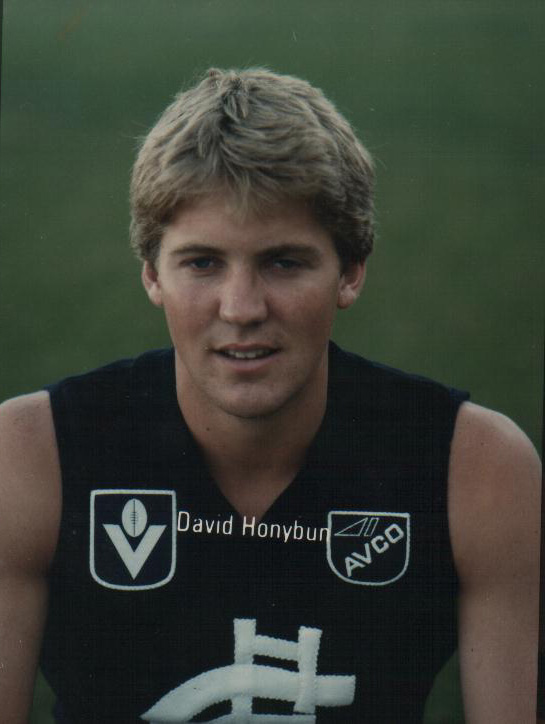 
Honybun was a mobile ruckman who joined the Blues around the time that Wow Jones and Justin Madden were the first choice talls. Originally zoned to Geelong as a youngster, Honybun was recruited from NSW country town and Murray League club Coleambally, which is located between Jerilderie and Griffith. He was cleared from the Cats to the Blues as part of a deal that saw rover Denis Lenaghan move to Geelong.

His debut game against North Melbourne was an eventful one. After making a very good debut and being one of the best players on the ground, Honybun was knocked out nine minutes into the third quarter and stretchered off the ground. Unfortunately for Honybun what he described as an"elbow to the jaw" left his memory of his debut game dimmed, when asked about his memories he said "I wish I could, but I can't remember much of the game at all".

Although on the list for a few years, he only played 5 games and Madden or Jones were dropped to the reserves. He was plagued with a few injuries and moved to North Melbourne for the start of the 1986 season after the Blues had loaded up their playing list with the likes of Kernahan, Dorotich, Bradley, Motley, Evans etc. In 1988, moved to Richmond where he played 55 serviceable games for the Tigers and will be remembered for taking a few screamers which occasionally pop up in the highlights reels.

Back injuries ended his career in 1992 and his total league career was 60 games and 41 goals.

Other than Coleambally, Honybun also played at few other clubs prior to his VFL debut, they included, University Blues, University Blacks thirds, Scotch College and Mackay, QLD.

Honybun also wore Guernsey No. 31 when he played with Carlton reserves in 1983.