Richard ‘Dick’ Vandenberg played three consecutive games and kicked 2 goals for Carlton in 1966. A tall rover-forward, he was recruited from Robinvale, and allocated guernsey number 8 in the second year of Ron Barassi’s tenure as captain-coach of the Blues.

After making a good impression at Reserves level through the first half of the season, Vandenberg was given his chance with the senior side in round 13, 1966 when seventh-placed Carlton hosted second-placed St Kilda at Princes Park. That day – not for the first time - the Blues caused quite a boilover in beating the Saints by 16 points.

It was a magical occasion for the 18 year-old Vandenberg, who years later was to say; “How well I remember it. They had Baldock at centre half-forward, Stewart in the centre, Murray at full-back, Synman at centre half-back and Ditterich in the ruck. We had a bloke called John Nicholls - who beat the lot of them.” *

Vandenberg shared the roving duties with Adrian Gallagher – who capitalized on Nicholls’ dominance and was almost as influential. The following week, Gallagher and Vandenberg combined again in Carlton’s emphatic win over Fitzroy, and they were together for a third time against Essendon at Windy Hill in round 15, when the Blues were brought crashing back to earth by a 7-goal defeat.

Vandenberg was one of the casualties from that defeat, and he spent the remainder of the season with the Reserves – before being told that his services were no longer required. He headed back home to northern Victoria, and over the succeeding years built a successful business as a chartered accountant, based in Swan Hill.

Some 30 years later, the Vandenberg name was seen again at Carlton when one of Dick's distant cousins – the similarly-named Richard Vandenberg, trialled briefly at Reserves level in 1997. Richie was not picked up by the Blues, so he joined VAFA club University Blues, and it was from there that he was spotted and drafted by Hawthorn. 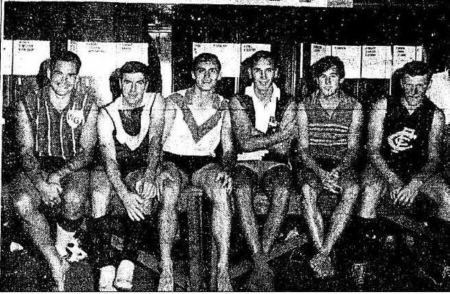 A sweet taste of victory for Jezza - 1970 Grand Final.jpg