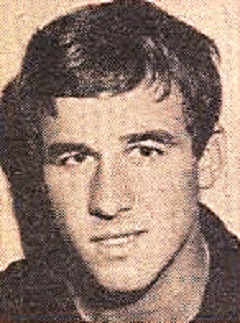 Dennis Munari came to Carlton as a promising centreman from that wonderful football nursery of Assumption College at Kilmore. A stylish right-footer, he was solid in his debut season in 1967, only to be edged out of his preferred position early the following year by the arrival of Tasmanian sensation Brent Crosswell. Munari then found a niche as second rover to Adrian Gallagher, and was instrumental in Carlton’s drive to the 1968 Premiership.

Munari wore guernsey number 37 for his first senior appearance – off the bench - in round 8 of 1967, against Geelong at Princes Park. The Blues won a thriller by four points, then lost another cliff-hanger by 2 points to Richmond a week later. In captain-coach Ron Barassi’s third season in charge, Carlton had begun emerging as a force after years of mediocrity, winding up the home and away rounds second on the ladder behind minor premiers Richmond.

In September 1967, before he had played even a dozen senior matches, Dennis experienced the thrill of running out onto the MCG for his first taste of finals football. The Blues fell short of expectations when they lost in successive weeks to the Tigers and Geelong, but one of the many positives to come out of that season was that Munari had shown that he was worth persevering with. In particular, his three goals in a tough debut final against Richmond won him a lot of fans.

He switched to guernsey 8 in 1968, and began a keen rivalry with Ian Nicoll for the second rover’s spot. Strengthened by the addition of Brent Crosswell, Neil Chandler and Ted Hopkins, Carlton rated as real Premiership contenders all year, before firming to favouritism by comprehensively beating the Bombers in the second Semi-Final. Essendon then overcame Geelong in the Preliminary Final, to set up a rematch with the Blues for the ’68 flag. Munari had damaged his left knee late in the season, which ruled him out of the last two home and away games, and that Semi-Final win over the Bombers. Fate then intervened when Nicoll was injured in the clash against Essendon, leaving Barassi to turn to Munari (even though he was short of match fitness) as Nicoll’s replacement for the Grand Final.

On that cool, blustery September day at the MCG, a huge crowd of 116,828 saw Barassi’s Blues break a 21-year drought with a hard-fought win over the persistent Bombers, in a match ruined as a spectacle by a strong cross-wind. Carlton had eight more scoring shots and hung on for a nail-biting three point victory. Although Blues wingman Garry Crane was a worthy Best on Ground, the platform for Carlton’s victory was provided by the ruck dominance of John Nicholls and his rover Adrian Gallagher. And when Essendon surged towards victory late in the third term, ruck-rover Serge Silvagni was rock-solid across half-back. Munari was prominent up forward in the first half, but faded later as his condition gave out.

Coming off the euphoria of that long-awaited Premiership, no-one would have been surprised if the dreaded Premiership hangover had kicked-in in 1969 – but it didn’t. The Blues held their form right through the year, finishing runners-up to Collingwood after the regular season, and knocking over the Magpies by six goals in an impressive second semi-final. Munari shared the two-man reserve bench with future Carlton President Ian Collins in that match, but both took little part in proceedings.

Awaiting Carlton as our Grand Final opponent in ’69 was Richmond, gunning for their second flag in three years under their charismatic coach Tom Hafey. This time however, Grand Final week proved a forgettable time for Munari. On selection night, he lost his place in the team to Nicoll, and on the following Saturday afternoon joined the many thousands of Carlton fans who watched helplessly as a rampant Richmond triumphed over the Blues by 25 points. 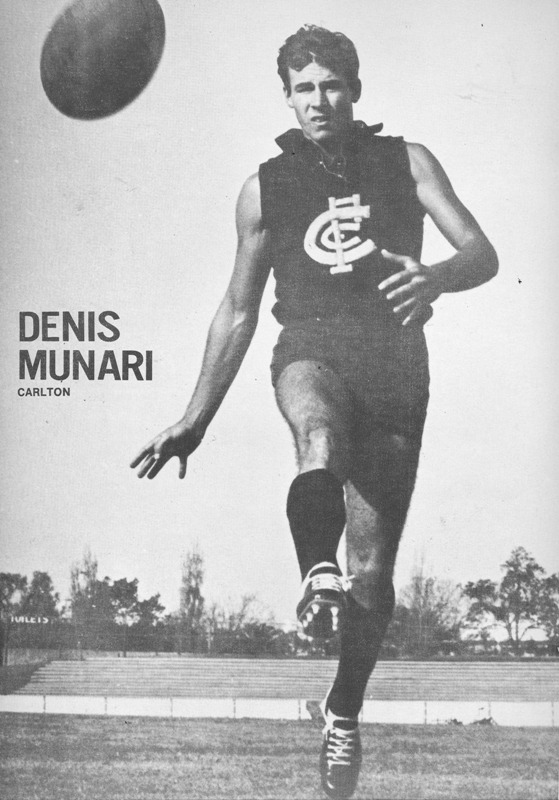 Munari’s last game for Carlton came in the final round of the home and away season in 1970, against Melbourne at the MCG. Sharing the roving duties once more with ‘Gags’ Gallagher, Dennis had a good match on an auspicious occasion for the Carlton Football Club – the day when champion forward Alex Jesaulenko became the first Blue to notch up 100 goals in a season. And three weeks later, ‘Jezza’ took his season tally to 115, with three telling goals in Carlton’s magnificent, come-from-behind Grand Final victory over Collingwood.

Munari signed with East Perth for 1971, but instead, ended up as playing coach of Hobart. This came about after Carlton’s former WA recruit Bert Thornley (a pivotal figure in the 1970 Grand Final) requested a release from his contract with Hobart just a few weeks into the season. The Tasmanian club was incensed that Thornley wanted to leave the Apple Isle, until Carlton stepped in to broker a deal, offering them Munari instead. When Hobart agreed, Thornley returned to his home state, and Munari travelled south to begin a turbulent 18-months as captain-coach of the Tassie Tigers. Unfortunately for all concerned, Hobart hardly won a match during that time, and before the mid-point of the 1972 TFL season, Munari was sacked - although many players and supporters of the club felt that he had been unfairly made the scapegoat for problems that ran deep within the administration of the club. By late 1972 Dennis was back at Princes Park playing Reserves football, before Preston lured him to the VFA in 1973.

Munari was contemplating giving football away for good in 1974, when a chance meeting with Ron Barassi (who by then was coaching North Melbourne) led to an invitation for Dennis to join the Kangaroos - who were short on experience and leadership. Barassi’s encouragement rekindled Dennis’ enthusiasm for the game, and he was appointed as assistant to North’s renowned Under-19 coach, Ray ‘Slug’ Jordon. In four years at Arden Street, Munari added another 13 senior matches to his tally, while twice winning the ‘Roo’s Reserves Best and Fairest award.

North’s memorable victory over Collingwood in the 1977 Grand Final replay marked the end of Munari’s time at Arden Street, and by 1989 he had returned to Princes Park to become an active member of the Carlton Past Players Association.In 2003, he was elected President of the Association – a post he held with distinction for a number of years.

Munari also wore No.53 when he played Reserve grade football for Carlton in 1972.

Jesse Glass-McCasker under pressure for the Northern Blues - VFL round 3, 2016..jpg