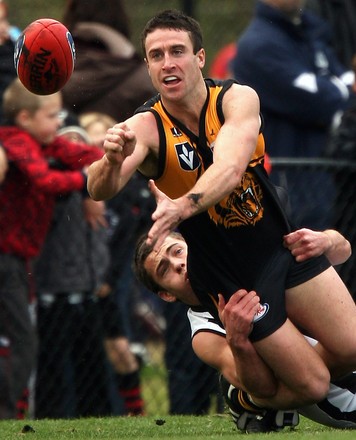 Dominic Gleeson played reserve grade football for Carlton in 2002, his brother Quinton Gleeson played with the Blues reserves in 1999. Gleeson is the nephew of former Blues premiership rover Adrian Gleeson. His cousin Martin Gleeson was drafted by Essendon in the 2013 National Draft.

Gleeson was originally recruited from Koroit via TAC Cup team the Geelong Falcons. Gleeson spent two years with the Falcons and was named vice captain of the TAC Cup team in 2001 to captain Jimmy Bartel. He was playing for VAFA Club University Blues when he got the call up to play reserve grade football for the Blues.

Gleeson headed to VFL club Werribee in 2004, he captained this club from 2008 to 2011. Gleeson later became an outstanding player in the VFL representing both Werribee and Geelong, he captained Geelong in their 2012 premiership win over Port Melbourne. Gleeson played three seasons with the Cats from 2012 to 2014 and racked up 55 games and kicked nine goals. In his 13 years within the VFL system he played 197 games, he was also an assistant coach for two seasons at the Cats. In 2013, Gleeson was the Victorian captain and awarded VFL Life Membership.

Gleeson next logical progression was into coaching his own team, he was appointed as senior coach for Torquay in the Bellarine FL. In his first season at the helm the Tigers were minor premiers but lost the 2015 Grand Final to Geelong Amateurs, they were knocked out in the 2016 Elimination Final. The Tigers were rewarded with the 2017 premiership with a resounding 51 point victory over Geelong Amateurs.