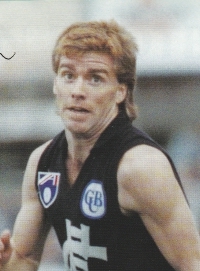 Adrian ‘Bear’ Gleeson joined Carlton from Koroit - near Warrnambool, in Western Victoria - in 1986, and carved out a fine career of 176 games, including two Grand Finals and the 1987 Premiership. A cheeky, hard-running rover-forward with great endurance and an eye for the goals, he was also a loyal clubman who happily contributed his skills and experience to the Blues’ Reserves team for an extra season after his days as a senior player were curtailed by injury.

Gleeson was the youngest in a family of seven sons who all played senior football. As a toddler he was nicknamed ‘Humphrey’ which later became ‘Humphrey Bear’ when he was given a Humphrey B. Bear suit as a gift and couldn’t be parted from it. On the football field however, his team-mates just called him ‘Bear’, a moniker that was to become his trademark at Princes Park.

Gleeson played all his junior footy with Koroit, beginning with the Under 12 team, and progressing right through to the senior side at the age of 16. After representing Victoria in the elite Teal Cup (Under 17) competition, he was approached by Melbourne and Geelong, but those were the days when every VFL club had its own zone, and Koroit was smack in the middle of Fitzroy’s patch. As a result young Gleeson was invited down to train and played a reserves game and one seniors practise match. The Lions expressed their interest in putting the youngster on their list but as he was in the middle of his HSC he refused the offer. Walls must have seen something promising in the young rover however, because when he was abruptly appointed senior coach at Carlton in 1986 (replacing David Parkin), Walls invited Gleeson to Princes Park for a trial with the Blues. And as they say in the classics, the rest is history.

Bear spent the early part of ‘86 with Carlton’s Reserves, where his efforts demanded elevation to the senior team for the first time in round 7. Although he faced perhaps the toughest initiation of all; taking on Collingwood at Victoria Park, it didn’t turn out that way at all. The rampaging Blues – with Craig Bradley, Wayne Blackwell and Ken Hunter dominant - smashed their fiercest rivals by seven goals. Proudly wearing the number 12 guernsey recently relinquished by 1981 Premiership defender Scott Howell, Gleeson shared the roving duties with champion Rod Ashman, in just about the perfect start for any new Bluebagger.

Bear kicked his first career goal the following week in another decisive win over Geelong at Princes Park, then suffered his first defeat on a freezing cold and miserable day at the Western Oval in round 9, when ninth-placed Footscray upset third-placed Carlton by 14 points in a low-scoring slogfest. After that, it was back to the seconds to see out the season – which ended on a spectacular note for the kid from Koroit when he revelled in the magic of the MCG on Grand Final day as a member of Carlton Reserves Premiership team.

Rod Ashman’s retirement in 1986 opened the door to a regular senior berth for Gleeson, who grabbed his chance in both hands and played 23 of a possible 24 games in 1987 - including Carlton’s glorious Grand Final victory over Hawthorn on the hottest Grand Final day on record. Mark Naley and Fraser Murphy were the first-choice rovers for the decider, so Bear started on the bench, and came on in the third quarter. On a scorcher of a day when the temperature reached 37 degrees, Carlton’s coaching staff knew that Gleeson would be running hard right through to the last minute, and that Hawthorn would be hard-pressed to hold him. That’s exactly what happened, and Bear was a real headache for the tiring Hawks in the latter stages of the match. Picking up plenty of possessions, he kicked a nice goal to the city end of the ground in the final quarter, while the Navy Blues charged home to win Carlton’s fifteenth flag by 33 points. After only 26 games for the Blues, Gleeson had added his name to the exclusive list on the door of the number 12 locker at Princes Park.

In 1988, Bear followed up with an even better individual year, although it finished prematurely when he was hit with a heavy shirt-front in a fiery game against Melbourne at the MCG in round 22. He suffered significant rib damage, and couldn’t play again before the Blues were knocked out of contention by the Demons in the Preliminary Final. Still, Gleeson could look back fondly on a landmark season in which he kicked 37 goals from 23 games ( including bags of six against Fitzroy, and five against Sydney) while earning 13 Brownlow Medal votes to be Carlton's major vote-winner. He also finished a solid fourth in the club’s Best and Fairest award.

Over the next five seasons, Gleeson was an automatic selection in Carlton’s senior team, although the Blues went through a rocky time as the VFL expanded into a 15-team competition with the addition of teams from Brisbane ( the Bears), Perth (the Eagles) and Adelaide (the Crows). By then, Gleeson was ranked among the elite of the game, and represented Victoria in State of Origin matches in 1990-91. His cheerful nature and “can do” attitude made friends easily, and he was a voted Carlton’s Best Clubman in 1992. Polling strongly again in the voting for Best and Fairest, he finished third behind his captain Stephen Kernahan, and crowd favourite Mil Hanna.

It wasn’t until 1993 that the Blues qualified for September action again, and raised the hopes of thousands of supporters with a hard-fought, 2-point win over Essendon in one Qualifying Final – the first VFL final ever played under lights. A week later, Carlton accounted for Adelaide by 18 points in an impressive Semi Final victory on the vast expanses at VFL Park, Waverley – setting up yet another Grand Final clash against the resurgent Essendon. As they had done throughout the latter part of the year, Gleeson and former Melbourne goal-sneak Brent Heaver shared the roving duties in the premiership decider, only to be swept aside by a fresher, faster and far more focused Bomber outfit that inflicted a humiliating defeat on the Blues to the tune of 44 points. For months afterward, that hiding burned deep at Princes Park, and sparked the Blues into a deep commitment to atone for a totally unacceptable capitulation. 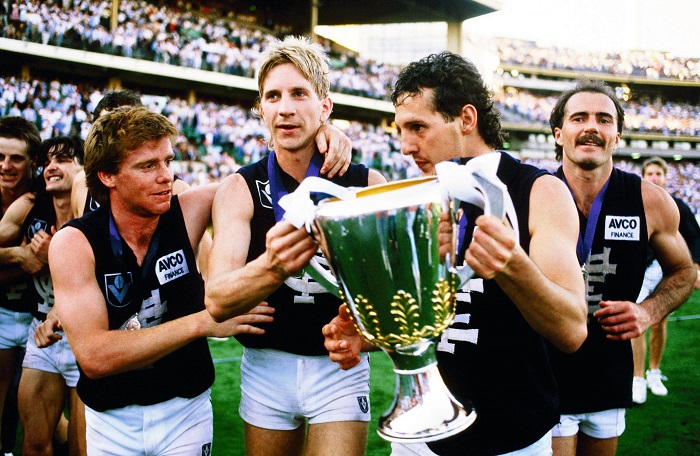 That task took another two seasons - until the shame of ’93 was finally expunged by the magnificent Carlton squad of 1995. On Grand Final day, the Blueboys’ sixteenth win on the trot delivered Carlton’s sixteenth flag - by ten goals over Geelong. Unfortunately for Gleeson however, he was on the wrong side of the fence that afternoon, thanks to a knee injury that derailed his season. After playing nine of the first ten matches, he had strained a ligament in the Blues’ huge win over Hawthorn in round 10. While he was back on the field with the Reserves within a month, the quality and consistency of Carlton’s senior list was such that Bear just couldn’t get another look in.

Further injury problems stretched Gleeson's absence from the senior side to more than a year, before he was welcomed back with another emphatic victory – this time over Adelaide at Princes Park in round 15, 1996. He played the next three games in succession, only to be omitted from the team after Carlton destroyed the competition’s 16th team; Fremantle, by 61 points at Princes Park in round 18. That turned out to be Gleeson’s last senior appearance for the Navy Blues. Gleeson was delisted at the end of 1996 but played in Carlton’s reserves side in 1997 as a Supplementary List player. He also served as an Assistant Coach that season. Gleeson finished off his fine career at Carlton with consecutive Reserves Best and Fairest awards in 1996-97.

During his playing career, Gleeson studied accountancy and financial planning. After his retirement, he began a new career as a consultant and established a successful business. Meanwhile, his ties at Carlton remained strong and in May 2006 he was appointed to the Blues’ Board and served as a Director for more than a decade.

'Bear' had two nephews who later played Reserves football for Carlton; Quinton Gleeson in 1999 and Dominic Gleeson in 2002.

Another nephew, Martin Gleeson, was drafted by Essendon in the 2013 National Draft.