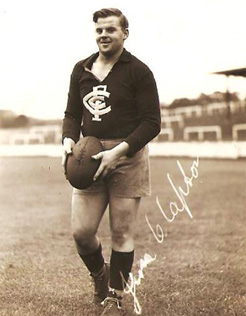 Nicknamed ‘Tubby’ because of his compact, barrel-chested frame, James Earl Chapman played four matches for Carlton in 1946 after being recruited from Merri Juniors in the local Northern District Football Association. Clapton served an apprenticeship in the reserves team prior to cracking it for a senior game for the Blues.

Although only 169 cm, Jim weighed a solid 76 kg, and was skilled enough to force his way into the reigning Premiership team to make his debut as second rover when Carlton played Geelong at Princes Park in round 9, 1946. In a very satisfying first outing in guernsey number 17, Jim and his fellow rover Jack Conley – aided by the ruck dominance of Jack ‘Chooka’ Howell – chopped up the Geelong defence and kicked seven goals between them.

The same pair shared the roving duties the following week against Footscray, although this time the opposition was a lot fiercer and Carlton were somewhat lucky to get home by 4 points. Tubby didn’t trouble the scorers that afternoon, and indeed, was destined to finish his career at Princes Park without adding to his tally.

Jim was named as 20th man when Carlton edged out South Melbourne in round 12, and sat on the pine again in round 13, when the Blues met Melbourne at the Punt Road Oval and lost by 17 points. He didn’t get another opportunity at senior level after that, and at the end of that one season, crossed to Coburg in the VFA.

Tubby was an effective and loyal servant of the Lions for a number of years, until his football days were ended by a serious knee injury. Before that came about however, he won the 1951 Todd Medal as Best and Fairest in the VFA Reserves competition.

Jim and his wife Evelyn lived in Fawkner for more than 50 years. His daughter Jean married 303-game VFL umpire Kevin Smith – who was in charge of the 1979 Grand Final in which the Blues accounted for arch-rivals Collingwood. And showing that the sporting genes were still active, Jim’s grandson Adam Smith played first grade cricket for Victoria and TAC Cup football with the Northern Knights.