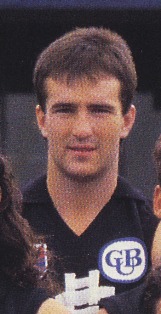 Jon Henry was originally recruited from Ardlethan, NSW via Assumption College as a strong marking, goal-kicking forward. Henry played U/19's in 1989 and Reserve Grade football for the Blues in 1989 and 1990.

In 1991 he headed to Brisbane but did not play senior football with them, he wore No.44 with the Bears duirng his stint with them. Henry played with O&M team Wangaratta Magpies from 1992 to 1995, before heading to Melbourne to study and joining East Ringwood as an assistant coach. From 2000 to 2001, Henry was the assistant coach at Wangaratta Magpies, he took over the senior coaching role in 2002. 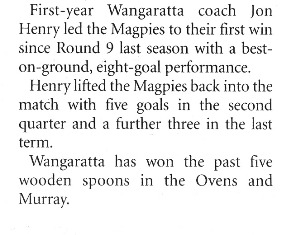