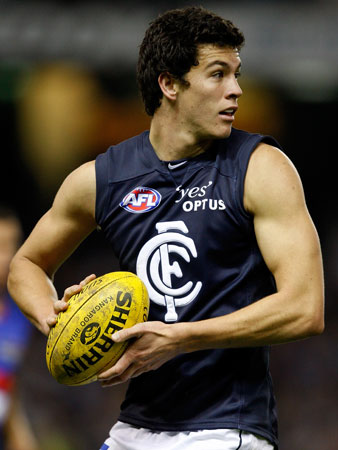 Mark Austin was an athletic tall defender recruited up by Carlton at selection 35 in the 2006 AFL Draft. Although he had missed that season’s Under-18 National Championships due to injury, he had nevertheless progressed through the ranks at his home club at Glenelg in South Australia to play two senior SANFL games, alongside his best friend Bryce Gibbs.

Assigned Carlton’s guernsey number 21, Austin took time to find his feet at Princes Park, spending just about all of his first year with the Blues’ VFL affiliate, the Northern Bullants. Eventually, he earned a call-up to the senior side for his debut against Melbourne in the last round of the 2007 season, and was sparingly used off the interchange bench as the Demons thumped Carlton by five goals.

During the off-season, Mark packed on another 4 kilos of muscle, and after a string of good performances at centre half-back for the Bullants, won a recall to the seniors when he was named at full-back for the round 16 match against Sydney. Austin did well in keeping his direct opponent Henry Playfair to one goal, and played three more games before season’s end, when his potential was recognised with a 2-year contract extension.

Unfortunately, Mark’s 2009 year mirrored the fortunes of his club as a whole – up one week, hammered the next. He put in some good games – round 12 against St Kilda was a standout – but he was also involved in three horrendous losses in which the Blues were thumped by 40 points or more. He kicked his first career goal in style against Collingwood in round 8, then was booked by the umpires and suspended for a week after Carlton’s good win over the Dockers in the “Live Strong” match at Subiaco. All up, he played nine games for the year, but wasn’t selected for Carlton’s anguishing Elimination Final loss to Brisbane.

In 2010, Austin set himself for a break-out season – only for his plans to go pear-shaped when a combination of hip and leg injuries struck him down again. Despite gaining a one-year extension to his contract, he didn’t play a match for the Bullants until May. From then on battled to string games together, and didn’t earn a recall to the senior side before the season ended with another narrow Elimination Final defeat by the Sydney Swans.

Thankfully, Mark had a much less-troubled prelude to his fifth season in 2011, and was promoted at last for the important round 14 match against West Coast at Docklands in late June. Right in the firing line at full-back however, he was overwhelmed in a one-sided, 6-goal defeat by the Eagles. Relegated once more, he spent the remainder of the year with the Bullants before being informed that his services were no longer required.

There is no denying that Austin’s career at Princes Park was blighted by a combination of injury and bad luck – and that his regular absences allowed the likes of Jamison, Henderson, Duigan, Laidler and Thornton to stake their claim ahead of him. But around the club, Mark still had admirers, and they were happy for him when he nominated for the 2011 Rookie Draft, and was picked by the Western Bulldogs with their last selection (number 76).

Austin put in a dedicated 2012 pre-season at the Western Oval, and clawed his way up through the ranks to play 11 senior matches by round 17 - when the Doggies met Carlton at Docklands. On that cool Saturday night, Lady Luck sneered at Mark yet again, and a fractured wrist brought a premature end to his most promising year.

Still, Austin recovered to play another seven senior matches in 2013, and 11 more the following year. In September 2014, he was solid at centre half-back when the Footscray VFL side beat the Box Hill Hawks in a high-standard Grand Final at Docklands, but that wasn’t enough to extend his AFL career, and he was delisted by Bulldogs a week or so later. Austin added another 29 games and 1 goal during his 3 years at the Western Bulldogs.