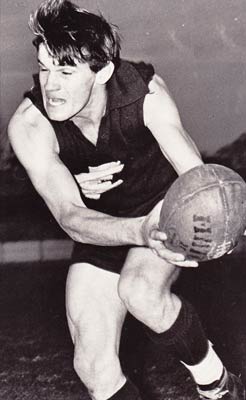 
Maurie Fowler was one of four members of Kyabram’s 1965 GVFL Grand Final team who were recruited by VFL clubs for the following year. A durable, hard-working rover, he played eight matches and kicked four goals in his only season for the Blues in 1966, before moving on to a wide-ranging and successful coaching career.

Fowler was allocated guernsey number 29 when he made Carlton’s list, and his good pre-season and practice match form justified his selection as 20th man for his debut in round 1 against Richmond on Anzac Day. After Carlton lost that sensational game by 6 points, Fowler sat on the pine for four of the next five matches. He kicked his first career goal when he was called into the fray against Footscray in round 6, and eventually started a game on the ground the following week, when he shared the roving duties with Adrian Gallagher against Geelong at Kardinia Park.

But after Carlton went down narrowly to Hawthorn in round 9 at Glenferrie Oval, Fowler was one of the casualties at the selection table, and he wasn’t able to reclaim a senior spot before round 18 concluded. Shortly afterwards, in the inevitable end of year cull, Maurie was told that his services were no longer required.

After leaving Princes Park, Fowler spent a season with Williamstown in the VFA. In 1968 he returned to the GVFL with Mooroopna, and the following year he was back at his original club Kyabram. In 1970 he was appointed captain-coach of Palm Beach-Currumbin on Queensland’s Gold Coast, and took the Lions to two flags in a four-year stay.

In 1975 he returned to Victoria as captain-coach of Robinvale in the Sunraysia Football League. The Eagles finished third in Fowler’s only season at the helm, then he was on the move again to Hay, NSW – where, in addition to captain-coaching the town’s football team, he was appointed General Manager of the Hay Services Club.

Maurie retired as a player in 1977, but continued to coach the Sunraysia League Lions until he won the position of General Manager of the Cobram-Barooga Golf Club on the NSW – Victorian border. While there, he coached Cobram in 1982 and ’83, taking them to their first Murray League Grand Final in nine years.

A decade later, Fowler returned to Melbourne to take up the role of Gaming Manager at the Flemington Racecourse. In 1996 he purchased the Globe Hotel in Mount Gambier, SA and converted it into Flanagan’s Irish Pub. By 2007 he was busy developing an over 50’s residential village in Tasmania, and providing business information and support for Australian Business Visa Applicants.