A Blues rookie who went on to coach the first AFL Women's team at Melbourne. 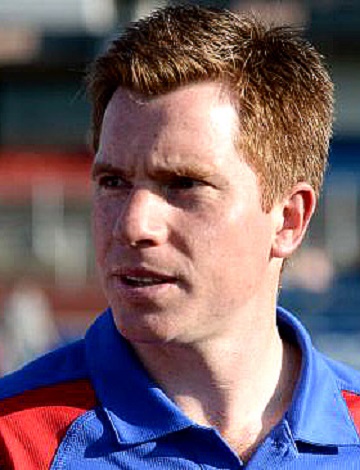 Michael “Mickey” Stinear spent one season on the rookie list at Carlton in 2003 without playing a senior game. So the following year he headed north to Queensland, where he began a notable playing and coaching career that would eventually earn him a place in AFL history as the inaugural coach of the Melbourne Women’s team.

Originally from Beaconsfield in Melbourne’s south-east, Stinear was a small, but quick and clever midfielder as a teenager, winning a Best and Fairest at Under-18 level with the Dandenong Stingrays. In 2002 he was rookie-drafted by Carlton, only to spend all of the following season playing VFL football with the Northern Bullants. When his contract wasn’t renewed by the Blues, Stinear accepted an offer to join Mount Gravatt in the QAFL, where his debut season was outstanding. Playing in the centre for the Vultures, he won the 2004 Grogan Medal as Best and Fairest in the competition.

In 2005 Stinear enrolled at the University of Queensland to study for a Bachelor of Business, coinciding with his appointment as captain of Mount Gravatt. After graduating in 2007, he went on to further study, and eventually acquired Certificates III and IV in Fitness, a Level 3 AFL coaching accreditation, and an Executive Certificate in Player Development. Meanwhile, he took his first steps into coaching with AFL Queensland, before returning to Victoria in 2011 to take up the role of Manager of the Auskick program. Still keen to play, he led St Kilda City as captain-coach in 2012 and 2013.

Stinear’s first step into elite-level coaching came in 2014, when he was appointed coach of the Oakleigh Chargers in the Under-18 TAC Cup competition, and he didn’t waste the opportunity. The Chargers won back to back flags in 2014-15, then lost a cracking 2016 Preliminary Final to the eventual premiers, the Murray Bushrangers. From then on, Stinear’s reputation as a teacher and developer of young talent was assured.

When the AFL Women’s competition was created over the summer of 2016/17, eight clubs were invited to participate, including Melbourne. The Demons already had a team and a coaching structure in place, headed by West Australian Michelle Cowan, who was widely tipped to lead the club into an historic season. However, the Fremantle Dockers pounced first, and Cowan was lured back to her home state as soon as the Dockers were invited to participate.

Mick Stinear was already a strong candidate when Cowan departed, but Melbourne set up a panel to evaluate all candidates before announcing that the 32 year-old had won the coveted job. The inaugural AFLW season was run over seven rounds between January and March 2017, and was enormously popular. Under Stinear, Melbourne won five games to finish third on percentage behind Grand Finalists Brisbane and Adelaide.