Grandson of a gun. 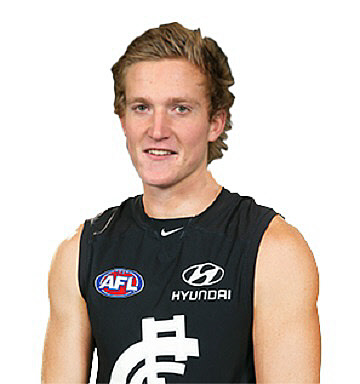 
Carlton’s heritage was back in the spotlight at the 2016 National Draft, when the Blues recruited 18 year-old Oakleigh Chargers key forward Patrick Kerr in the fourth round at number 65. A fast-leading forward with sure hands and a reliable kick for goal, Patrick is the son of former Carlton lower grade player Stephen Kerr and nephew of former player and committeeman Peter Kerr, and the grandson of Carlton Hall of Fame member Laurie Kerr - who passed away in 2001. Patrick’s grandmother, Vivienne, continues as the club’s number 1 female member, and proudly maintains that has been to just about every Carlton home game since 1950.

Patrick recovered from a serious shoulder injury in 2015 to play in the Chargers’ TAC Cup Grand Final victory over the Eastern Ranges. He was appointed Oakleigh vice-captain in 2016 and represented Vic Metro in the National Under-18 Championships, before being drafted by the Blues. His coach at Oakleigh; former Blue Mick Stinear, said he was confident that Kerr would play senior football. “He’s got a nice, strong and accurate kick on him, and he’s a hard man to stop when he’s on the lead and the ball is out in front,” he said. Kerr had a tough 2019 missing a lot of footy through injury, at the end of the season he was delisted by the Blues. Kerr would sign on for his original junior team VAFA team St Kevin's for the 2020 season.

Patrick Kerr would sign on with VFL Club Port Melbourne for the 2021 season to play at the famous Borough. Kerr would nominate St Kevin's as his nominated 'home club' in season 2021.

Laurie Kerr wore guernsey number 11 in his 149 VFL games. Bluebaggers would be thrilled if Patrick could manage something similar in number 36.

Kerr would debut in 2018, kicking 2 goals from 4 matches as a stay at home Full Forward.

Kerr was recruited from Glen Iris via St Kevin's College via the Oakleigh Chargers.