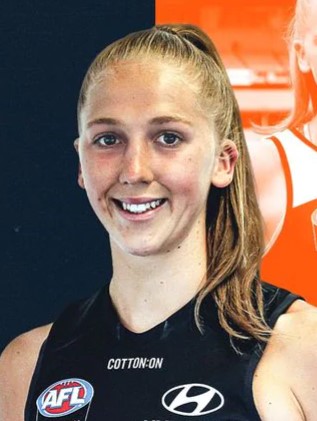 Carlton finalised its AFLW playing list on the eve of the season, bolstering its young talent yet again with the signing of Paige Trudgeon. The cross-coder joins the Blues after a year of football at the Montmorency Football Club having played basketball for much of her junior career. Trudgeon makes her way onto the list as a replacement for Chloe Dalton, who will miss the 2021 season due to her commitments with the Australian Rugby Sevens team. Missing out on selection in the recent 2020 NAB AFL Women’s Draft, Trudgeon proved herself at Ikon Park by training with Carlton’s VFLW side, before completing sessions with the AFLW squad as a nominated train-on in the new year.

The 20-year-old utility stands at 180cm tall and adds depth to Carlton’s AFLW newcomers obtained over the off-season. Announced as a new Blue following Thursday night’s training session, Trudgeon was overwhelmed when Senior Coach Daniel Harford informed her she would be elevated to the AFLW list. “We’re delighted to have capped off the year’s new recruits with Paige joining us for 2021,” Harford said. “Paige’s determination and resilience has got her on our list, as well as her talent. She’s dedicated to getting better and we saw that first-hand when she was able to really impress us as a train-on player for our VFLW and then our AFLW program. “We’re really pleased with the young talent we’ve been able to bring in over the off-season and Paige only adds to that group. “It’s a really exciting time for all of us with the season so close and it’s even more exciting for Paige to get this chance. We’re looking forward to her showing what she’s displayed over the summer so far.”