‘Campo’ - 233 game Premiership player, Best and Fairest and All Australian. 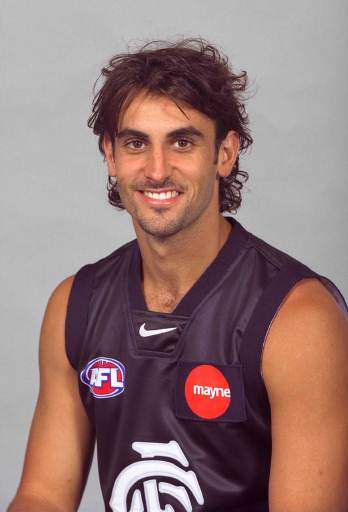 A stylish, long-kicking wingman from South Australian club Woodville-West Torrens, Scott Anthony Camporeale was a member of Carlton’s 1995 Premiership team in his first year of AFL football. Quick, clever and equipped with a raking right foot, “Campo” went on to play 233 games for the Navy Blues, before his messy defection to Essendon in the twilight of his career.

After being recruited with Carlton’s first selection (number 15) in the 1994 National Draft, Camporeale settled quickly into life at Princes Park, and his form throughout the 1995 pre-season – at a club that had made the Semi Finals the previous year – was outstanding. While still a teenager, ‘Campo’ made his senior debut in round one, 1995 against Collingwood at the MCG on the first Sunday in April, racking up 19 possessions as the Blueboys demolished their traditional rivals by five goals.

In the following week’s match against Fitzroy at Princes Park, Camporeale, Greg Williams and Mil Hanna combined in a dominant centre line that sparked Carlton to a massive win. Scott’s 25 possessions included a long bomb on the run to register his first career goal, and saw him nominated for the AFL’s Rising Star award. By September, Camporeale had worn Carlton’s guernsey number 16 in every game of his debut year, and when he came off the interchange bench to help the Blues demolish Geelong in the Grand Final, it capped off a fairytale season for Carlton’s Best First Year Player.

In 1996, Campo’s consistency stood out, and he played in all but one of the Blues’ 23 matches for the season. Carlton again finished the home and away rounds as minor premiers, only to be dumped from the finals in straight set defeats by West Coast and Brisbane. Halfway through the following season a bout of glandular fever halted his progress, but he was back to his best in 1998 and was selected to represent his country in the International Rules Series against Ireland.

After representing his country once against the Irish, Camporeale played in the second Grand Final of his career in 1999, when North Melbourne accounted for an emotionally-spent Carlton side that had battled through three successive finals to make the play-off. Campo played his heart out that afternoon, collecting 27 disposals and two goals as the Blues went down by 35 points in front of 94,000 at the MCG.

In 2000, the Blues were in flag contention again for most of the year, and Campo played every game until Essendon knocked Carlton out the flag race with a 45-point hiding in a Preliminary Final. For the second year running, Scott was valiant in defeat with 35 disposals and two goals, and his value to the side was underlined when he was selected on a wing in the All Australian team before being voted Carlton’s Best and Fairest in a tie with Brett Ratten.

By 2002, Camporeale had played more than 150 games. Still only 26, he seemed on the verge of the best years of his career before a series of events at Princes Park sent the Blues sliding down the ladder toward the brink of oblivion. Injuries to key players, poor recruiting and a raft of draconian penalties for rorting the salary cap saw the club implode between 2002 and 2005, and suffer the indignity of collecting the first two wooden spoons in Carlton’s history.

Campo soldiered on through much of that traumatic period, rarely missing a game and shouldering the burden of leading by example. In 2004, Carlton coach Denis Pagan implored Scott to change his game style and become more accountable for his direct opponent. Campo responded by upping his tackling stats from 1.9 to 3.3 a game – while also averaging 20 disposals and at least one goal per match to finish fourth in voting for Carlton’s Best and Fairest. Earlier in the year – in round 10 against St Kilda – he had played his 200th game for the Blues and seemed to be finding a second wind.

However, 2005 saw the Blues plunge to the bottom of the ladder again and Camporeale was one of a number of Blues who seemed to be dispirited by constant defeat. Toward the end of the season Pagan asked him play to defence with little positive effect, even though he continued to win the ball, averaging 21.7 possessions in 21 games. 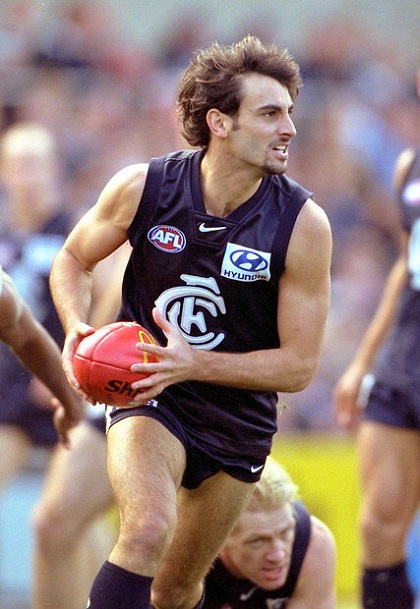 Campo’s contract expired at the end of that year, and after drawn-out negotiations he asked for a clearance to another club – preferably Essendon. At the time, it was said that a number of factors influenced his decision to leave, including the Blues’ offer of a performance-based contract, the lack of success at Carlton in recent years, and dissatisfaction with the coach. Whatever the truth of the matter, the two clubs failed to settle on a suitable trade and in the end, Camporeale joined the Bombers as a free agent – leaving Carlton without any compensation.

Having fallen to 13th in 2005, Essendon believed Campo would provide leadership to their midfield. However, he managed only 12 games in his first season at Windy Hill, thanks to a succession of soft tissue injuries to his 30 year-old battle-worn legs. When he was fit, his ball-winning ability remained and he averaged 21 possessions per game, but overall, his impact was minimal. If he had been dissatisfied with Carlton's lack of success, or believed he could turn Essendon's fortunes around, he was obviously mistaken. The Bombers only finished ahead of Carlton on percentage in 2006, with three wins and a draw (against each other) apiece.

Camporeale played his 250th career game in 2007, but continued to struggle with injury. He saved his best for Essendon’s round 20 clash with Carlton, gathering 35 possessions in a 10-point win to the Bombers – only to suffer a serious knee injury just a week later against Richmond. Aged 34 by then, facing surgery and almost 12 months of arduous rehabilitation, Scott opted for retirement.

Once recovered and back on his feet, Camporeale took up a role as an assistant coach at Essendon for three seasons, before returning to his home state in 2010 as midfield coach of the Adelaide Crows. In July 2015, while continuing in that role with the Crows, Camporeale was elevated to the position of senior coach in a caretaker capacity, after the tragic death of incumbent Phil Walsh. He was an applicant for the senior post from 2016, but lost out to former West Coast Premiership player Don Pyke.

In May 2016, Camporeale briefly returned to Princes Park, and gave a gracious speech when he was inducted into the Carlton Hall of Fame.

Scott Camporeale and Brett Ratten are the only Blues (so far) to have played more than 200 games for the club without taking part in a drawn match.