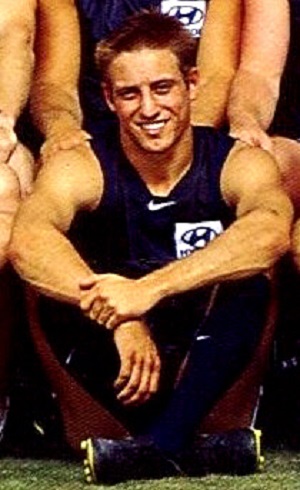 Damien Lock was a busy left-footed utility who played two seasons with Carlton in the wake of the 1995 Premiership. Not blessed with great pace, but a noted exponent of handball, Damien’s AFL career was hampered by injuries at precisely the wrong time. After departing from Princes Park, he enjoyed a long and successful career in country football over the next 15 years.

Lock began playing as a junior with Eaglehawk, one of the Bendigo Football League clubs with strong ties to Carlton. Showing a lot of promise, he was recruited by the Bendigo Pioneers in the elite TAC Cup competition during his teens, and in 1996 was used as a top-up player for the Blues’ Reserves. A number of standout games for the seconds saw him picked up by Carlton at pick 52 in 1996 National Draft.

When Brent Heaver retired at the end of ‘96, his number 17 guernsey was passed on to Lock, who spent all of 1997 with the Reserves. Showing steady improvement, Damien received his call-up to the senior side at last when Carlton hosted the Adelaide Crows at Princes Park in round 1, 1998. He was eased into the match and played steadily in a 10-point win.

By mid-June, Lock had racked up 12 matches straight – six from the bench, and the rest across the centre and half-forward. Then a strained groin halted his progress, costing him six weeks on the sidelines. He was recalled for rounds 18 and 19, but again spent most of his time on the pine, and finished off the year back in the lower grade.

In 1999 he copped a knee to the kidneys during pre-season training, shortening his preparation and delaying his recall until round 11. He played three of the next four matches through the interchange gate, and completed his senior career the way it had started - with a good win over Adelaide at Princes Park in round 15. Despite that victory, Damien lost his place again the following week, and couldn’t earn a recall before he parted company with the Blues at season’s end.

After leaving Carlton, Lock spent a year with the short-lived VFL conglomerate Coburg-Fitzroy, where he was joined by two other ex-Blues in Matthew Hogg and Damian Lang where he played 6 games and booted 8 goals. In 2001 he returned to his home town and signed with the Bendigo Diggers, staying with them until 2003 when they merged with Essendon and became the Bendigo Bombers. He then returned to his original club Eaglehawk until 2006, when he was appointed captain-coach of Colbinabbin in the Heathcote and District Football League. He led the Grasshoppers all the way to the HDFL Grand Final in his second season, where they were beaten by Elmore.

Lock returned to Eaglehawk once more in 2008, and at the age of 30, had a spectacular year. The Two Blues edged out Golden Square by 6 points in a classic BFL Grand Final, and Damien’s dominance of the centre won him the Nalder Medal as Best on Ground. Because of that excellent effort, WAFL club Peel Thunder approached him, and in 2009 he crossed the Nullabor to play 18 matches in a one-season stay.

Back in the HDFL in 2010, Lock was appointed captain-coach of North Bendigo. He took the Bulldogs into the finals the following season, where they were beaten by White Hills in a fiery Elimination Final. Damien was reported during the match and suspended for five matches, only to make the penalty irrelevant by retiring at season’s end.

After hanging up his boots, Lock was soon back again at Eaglehawk in the role of assistant coach. But the urge to take on the top job was still strong, and in 2016 he accepted the position of senior coach with Loddon Valley Football-Netball League club Marong.

Damien Lock would also have a career in boxing amongst other things.

At the end of the 2013 season, the Bendigo Pioneers Football Club named its best team of the previous 21 years. The side selected included three players - Andrew Walker, Luke Livingston and Damien Lock - who had played senior football with Carlton, and another three; Steven Reaper, Simon Rosa and Michael Braun, who had had a run with the Carlton Reserves. (Braun in fact had played in a premiership side with the West Coast Eagles). The team was compiled by a panel of past and present Pioneer coaches, including two former Carlton players, Brian Walsh and Tony Southcombe.

When he first played Reserves football at Carlton, Lock wore guernsey number 56. From 1998, he wore number 17.

1995 GF - Madden gets his kick under pressure.jpg