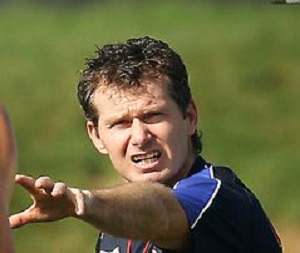 After a long and decorated playing career of more than 300 games at Collingwood and Sydney, and a brief period as caretaker coach of the Western Bulldogs, Paul Williams arrived at Carlton in 2012 to take up a role as assistant coach to Brett Ratten.

Tasmanian by birth, Williams had been an outstanding junior player for his club, North Hobart, and for his home state, before Collingwood drafted him at number 70 in the 1989 National Draft. Over the next decade - a period of little success for the Magpies - he became one of his team’s stars as goal-kicking midfielder-forward. By the turn of the century he was rising 27, and had racked up 189 games and 223 goals for the Magpies before he surprised by requesting a trade to Sydney. The Swans stepped up with draft picks numbers 8 and 39, and Williams soon headed north to continue his career in the Harbour City.

At Sydney, Williams became an even better player, winning the Bloods’ Best and Fairest in his first two seasons in 2001-02, and being selected as an All Australian in 2003. However it wasn’t until his 294th senior game that his career peaked, and he played at half-forward in Sydney’s drought-breaking 2005 Premiership team. He retired at the end of the following season, with 306 games and 307 goals to his credit.

In 2007, Williams moved on to an assistant coaching role with the Melbourne Demons, and two years later switched to a senior assistant’s position under Rodney Eade at the Western Bulldogs. Late in 2011, Eade abruptly resigned, and Williams was thrust into the hot seat as caretaker coach for the last three games of the season. He did well to win two of those matches, but his application to continue was unsuccessful and Brendan McCartney was appointed in his place.

Williams then joined Carlton as an assistant to Brett Ratten, and seemed to jump from the skillet to the fire. By then, Ratten was under the pump ahead of his fifth ultimately fruitless season. Yet again, some big wins were indispersed with some horrendous losses, and when the last slim chance of a finals berth went begging in August of that year, “Ratts” was sacked.

A few weeks later, former Collingwood and West Coast Premiership coach Mick Malthouse became the new man in charge at Princes Park. He wasted little time in putting a broom through the existing coaching staff, and Williams was one of those told that his services were no longer required. By then there were few, if any, coaching positions still open at other clubs, so Williams elected to put his coaching aspirations on hold, and to concentrate on building a business career instead.