Hawthorn smashed Carlton by a record 138 points on this awful Friday night at Docklands.

Just when it seemed that Carlton’s predicament couldn’t possibly get any worse, Hawthorn inflicted an all-time record defeat on the Navy Blues in this one-sided Friday night debacle at Docklands. Despite the incentive of captain Marc Murphy’s 200th game, and a national prime-time television audience, the hapless Blues were outplayed in all facets of the game by the rampant Hawks, and humiliated by 138 points.

Sitting 16th on the 18-team AFL ladder after 16 rounds of matches, the Blues came up against a Hawthorn team in top form and gunning for a sixth successive win. In two changes to the line-up beaten by Fremantle the previous week, Andrew Carrazzo (foot injury) and Tom Fields came out, replaced by Blaine Boekhorst and Liam Jones. A third change became necessary on the afternoon of the match, when Troy Menzel’s knee problem flared again and Blaine Johnson was called up. Second-gamer Brad Walsh was designated as Carlton’s substitute. 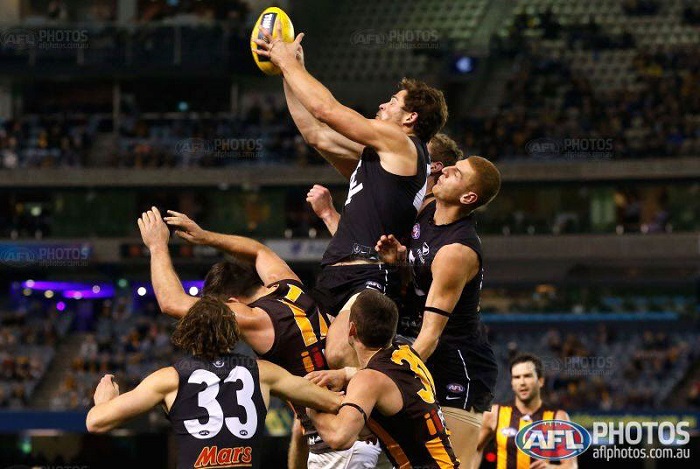 The Blues started well, and with Matthew Kreuzer in the role of ruck-rover, won the opening exchanges. Chris Yarran and Patrick Cripps had the first two shots on goal, but both missed and from then on it was all Hawthorn. The Hawks slammed on the first nine majors of the match in a dominant first half peppered with some fiery incidents. Hawthorn defender Josh Gibson was reported early in proceedings for a punch to the midriff of Boekhorst, before Carlton’s Nick Holman was cited for a late spoil on Hawk Luke Breust. A number of other clashes came under scrutiny by the Match Review Panel, but no further charges were laid.

Derisive cheers greeted Carlton’s first major of the match – to Andrejs Everitt at the 16-minute mark of the second quarter. By then Hawthorn were 47 points up and on top all over the ground. At half-time they had stretched their advantage to ten goals, and that margin was to more than double before the final siren brought a merciful end to the rout.

In a Carlton side that was shaken, rattled and eventually steamrolled by a Hawthorn combination building toward a third-successive flag, only captain courageous Marc Murphy (37 disposals, 9 marks) Pat Cripps, Tom Bell and Matthew Kreuzer emerged with their reputations intact.

As for the once-mighty, down and out Old Dark Navy Blues, only pain, frustration and anger remained.

200 Games : Marc Murphy
50 Games : Levi Casboult
Last Game : Blaine Johnson
First Goal : Blaine Boekhorst
Score Record : This was our greatest losing margin ever, overtaking a previously horrific loss against North Melbourne in Round 22, 2003.
Score Records : This was our lowest-ever score against the Hawks.
A Long Decade : This game marked 10 years since we last defeated Hawthorn