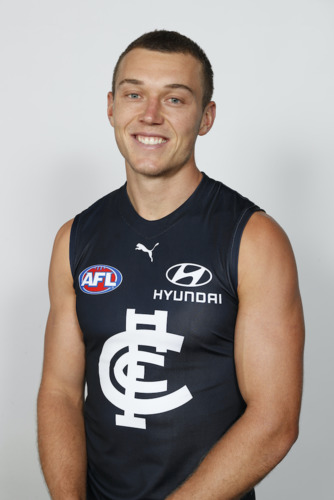 West Australian star Patrick Cripps was Carlton’s first round selection in the 2013 AFL National Draft, and came to Princes Park with some impressive wraps. A third cousin of West Coast and former St Kilda player Jamie Cripps as well as past West Coast Eagles Champion Chris Mainwaring, Patrick was an Under-18 All Australian in 2013, and vice-captain of WA in the National Championships.

A big-bodied midfielder with strength, discipline and outstanding peripheral vision, he had been compared to champion Greg Williams in some aspects of his play. Nicknamed “The Extractor” during the Under-18 championships, he averaged 19 disposals (12 contested), 6 clearances and three tackles in three matches for his home state. That was an outstanding effort, particularly in light of the fact that he suffered a broken leg in 2012 and didn’t start preparations for the 2013 season until well after most of his contemporaries. Carlton’s recruiting team identified Patrick as their first priority many weeks beforehand, and some rival clubs were surprised that the Blues jumped in so early for a player that was generally expected to attract most interest among selections 20 to 30.

However, Blues chief recruiter Shane Rogers was adamant that the club had landed a future gun. Speaking to the press after the draft was completed, Rogers said, “It's funny - you guys wrote that he's 'The Extractor' and that's what we've called him all year. He's got a Diesel Williams-like brain. He sees kids outside, and finds them with handballs. The club identified that we need big-bodied midfielders to feed the ball out to the running players, and that’s what we’ve got."

In guernsey number 16, Cripps debuted for Carlton in a shock loss to bottom of the ladder team Melbourne on a Saturday afternoon in round 4, 2014. A week later he celebrated his first victory when the Blues accounted for the Western Bulldogs at Docklands, only to then suffer a lower leg fracture that stopped his progress. After surgery and a four-week delay, “Crippa” returned to spend most of the rest of the season in the VFL with the Northern Blues - until Carlton’s last match of the year against Essendon, when he was recalled as the Blues’ substitute. That clash ended in a draw in front of 56,000 at the MCG, to balance Cripps’ career statistics at one win, one loss, and one draw. In September, Patrick finished second to his fellow midfielder Tom Wilson in voting for the Northern Blues Best and Fairest.

Carlton supporters braced themselves for a tough year in 2015, but few foresaw the disaster that unfolded. The Blues were well-beaten in their first three games, and the club fell into disarray by May, when senior coach Mick Malthouse was sacked. From then on, injuries to key players wrecked the latter part of the season, leaving caretaker coach John Barker to collect the wooden spoon. Amid all this mayhem, the one shining light for the Carlton faithful was Cripps. Having switched to guernsey number 9, ‘Crippa’ started the season from the interchange bench against Richmond in round one, and immediately started to blossom into an elite midfielder. When Carlton eventually celebrated a victory – over St Kilda on Anzac Day in Wellington, New Zealand – Cripps won an a Rising Star nomination when he racked up 33 possessions (23 contested) 11 tackles and eight clearances.

Midway through the season, when Chris Judd and Marc Murphy were both sidelined by injury, Cripps shouldered enormous responsibility as Carlton’s number one on-baller, and went on to play 20 of a possible 22 games for the year. He rarely failed to make the list of Carlton’s best players, and although he was ranked first among all of the Rising Star nominees for total disposals, effective disposals, clearances and contested possessions, he didn’t win the award. Instead, it went to Melbourne’s exciting young key forward Jesse Hogan. Cripps set a new AFL record for most clearances as well as most contested possessions ever recorded in a season by a Rising Star Nominee.

Hogan’s achievement was made even more meritorious a fortnight later, when Cripps became the second-youngest player in Carlton’s history (after John Nicholls) to win the club’s Best and Fairest award. Topping off a sensational start to his career, ‘Crippa’ edged out his captain Marc Murphy by one point, while also taking home a swag of other trophies, including the Hyundai Most Valuable Player (voted by the fans) and the Chris Judd Development Academy Award. Earlier, Pat had been named as Centreman in the AFLPA 22Under22 team – recognising the best young players in the game. His stellar season was even more remarkable in that week after week, throughout one of Carlton’s worst years ever, he had to win his own football. The Blues’ 2015 was a disaster, and Cripps was given little support in a team that finished last on the ladder.

It was a similar story in 2016. Under a new senior coach in Brendon Bolton, Carlton started with four successive losses before staging a mid-season revival that brought 5 wins in 6 games. Then in late May, skipper Murphy suffered a season-ending ankle injury, and Cripps had to assume the role of the Blues’ midfield leader once more. That made him a focus of the opposition’s planning, and guaranteed constant pressure, but Pat embraced the responsibility. In 21 games over the season, he averaged 26 disposals, 16 contested possessions, 6 tackles, and just under 9 clearances per match, even as the Blues fell away and lost all but one of their last 11 contests. Cripps’ season total of 185 clearances was the highest-ever recorded since fellow Blue Brett Ratten tallied 216 in 1999, and he also registered the highest average contested possessions in the competition.

Little wonder then, that in September, ‘Crippa’ was included in the AFLPA 22Under22 team again in the Centre position, before winning the Hyundai Most Valuable Player Award for a second time, and finishing third behind Sam Docherty and Kade Simpson in voting for the John Nicholls Medal. Undoubtedly one of the brightest prospects in the game, he will begin his fourth season of AFL football in 2017, with his 50th game still ahead of him.

Cripps came back from an injury-riddled 2017 and completed an outstanding 2018 season in which he set a new AFL record for most contested possessions in a home & away season with 387 at an average of 17.6 per game. He started the season with by equalling champion Chris Judd's club record for most contested possessions in a match with 25 against Richmond in Round 1, 2018. In the Round 23, 2018 match he also equalled the record for most centre clearances in a single match with 12 joining Jason Johnson from Essendon as well as recording the 2nd highest amount of total clearances in a single match with 18, 1 shy of Brent Moloney from Melbourne's record. He finished the season ranked 1st in the AFL for total contested possessions, 1st in total centre clearances, 2nd in total clearances, 3rd in total disposals, & 6th in total tackles. Cripps' fantastic season was rewarded with his inaugural selection in the All Australian team as ruck rover as well as finishing 2nd in the AFL Coaches' Association Player of the Year Award. He also finished 4th in the Brownlow Medal polling an incredible 20 votes in a team that only won two matches for the season.

In the Round 5, 2019 44-point victory over the Western Bulldogs, Cripps broke the club record for most handballs recorded in a match with his tally of 32 breaking the previous record held by Greg Williams; it was enough to see him earn the 3 Brownlow votes for that match. In the Round 12, 2019 victory over the in-form Brisbane Lions, Cripps became just the 9th player in AFL history to record 38+ disposals and 4+ goals in the same game in a dominant best on ground performance which also included 8 clearances and 16 contested possessions. He later went on to equal the official AFL record of most ever clearances in a match when he registered 19 clearances in a dominant display during the Round 19, 2019 victory over the Adelaide Crows, in which he also registered a career best 39 disposals including 24 contested possessions to go with his 7 tackles and a spectacular left-footed snap goal from 40metres out straight out of a ruck clearance.

Cripps completed an outstanding 2019 season ranked first in the AFL for most clearances per game and second for most contested possessions per game. He was rewarded for his outstanding season with his 2nd consecutive selection in the All Australian team, named in the Centre. He later received the ultimate accolade when he was voted by his peers as the AFL Players' Association Most Valuable Player of the season in a landslide finishing with 832 votes ahead of Geelong's Tim Kelly who had 519.

Cripps started 2020 where he left off the previous year, however after sustaining a left shoulder subluxation injury in the Round 5 match vs St Kilda, he bravely fought on to play the rest of the season however was noticeably hampered which caused a drop in form. He still ended the season ranked no.1 in the AFL for Centre Clearances.