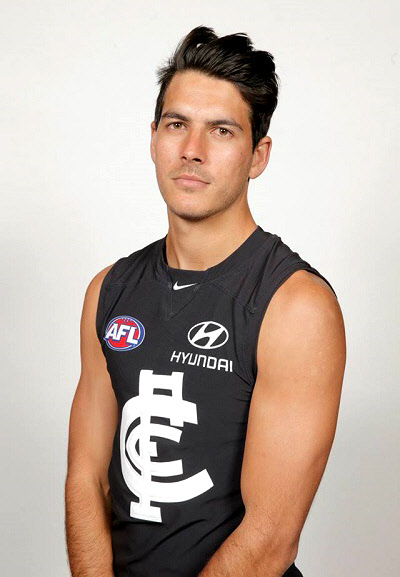 A quick and clever midfielder originally from Port Headland, WA, Blaine Boekhorst was Carlton's first pick in the 2014 National Draft at number 19. A former West Australian state volleyballer, he had burst to prominence in the WAFL at Swan Districts earlier that year, playing 19 of 20 games and averaging nearly 21 possessions per match. His ability to run and carry, then finish off with accurate disposal impressed Carlton’s recruiters, who selected him in preference to others up to four years younger.

After a solid pre-season, Boekhorst wore his guernsey number 12 for the first time in a pre-season round 1 NAB Cup Challenge game against the West Coast Eagles at Mandurah WA, in February, 2014. He was only sparingly used in that match, but when the season proper got underway Blaine soon put up his hand for senior selection with some strong performances at VFL level with the Northern Blues. Meanwhile, Carlton’s senior team had been soundly beaten in their first three games.

Round 4, 2015 – Anzac Day - was an historic occasion for the Carlton Football Club, when the Navy Blues played St Kilda in Wellington, NZ in the club’s first international game for premiership points. Two of Carlton’s four inclusions for that match, Boekhorst and Matthew Dick – made history that afternoon as the first Blues to make their senior debut in another country. And they made it doubly memorable by contributing to a much-needed win.

From then on, Boekhorst played another ten games, gradually adjusting to the intensity of AFL football in a Carlton side that was regularly pulverised and finished up with the wooden spoon. Blaine’s first career goal in round 17 against Hawthorn, a soaring mark against North Melbourne in round 18 and an eye-catching 18 possessions against Collingwood in round 19 were highlights, before he was announced as the Blues Best First Year Player at season’s end.

In 2016, Boekhorst was one of his team's better players in the traditional opening round blockbuster against Richmond before hamstring and wrist injuries restricted him to only seven senior matches for the season. At his best, Blaine has all the assets to be an elite footballer, but now he needs a big 2017 to cement his future with the Blues.

After playing 7 of the last 11 games in 2017 Boekhorst was advised that his contract wasn't to be renewed and he was delisted by the Blues. Despite his young age and 'Blues best' form in his last year, Boekhorst was not picked up by another AFL Club. In 2018, Boekhorst would line up for WAFL team East Fremantle. Despite missing the last four games of the 2022 season through injury Blaine won the prestigious Sandover Medal for best player in the WAFL.