In a thrilling contest, Carlton lost to Essendon by 1 point at Princes Park.

In front of a full house at Princes Park, Carlton and Essendon produced the match of the season to date, with the Same Old getting home by the slimmest of margins after a titanic last quarter that had the grandstand bouncing with excitement. Befitting of a game between first and second on the ladder, the Blues and Essendon turned on a fast, open and skilful display of everything great about the Australian code of football, and the result was in the balance until the final bell.

Carlton made two changes to the side that had easily accounted for University the previous holiday Monday, bringing in star defender Billy Payne, and a mature aged recruit from Yarraville in Doug Fraser – who would be a central figure in dramatic events later in the season.* Jim Tumilty and Percy Sheehan were the two who made way.

After Carlton captain-coach ‘Pompey’ Elliott won the toss on a perfect winter Saturday afternoon, the Blues kicked with the wind. The scoring was relatively sparse in the first quarter – 3.4 to 1.3 in favour of the Blues – as the dash and determination of both defences stood out. Essendon used the wind to draw level at half-time on 4.6 apiece, but seemed to be in jeopardy when their tough follower; ex-Blue Jim ‘Bull’ Martin, limped to a forward pocket with a serious ankle injury. 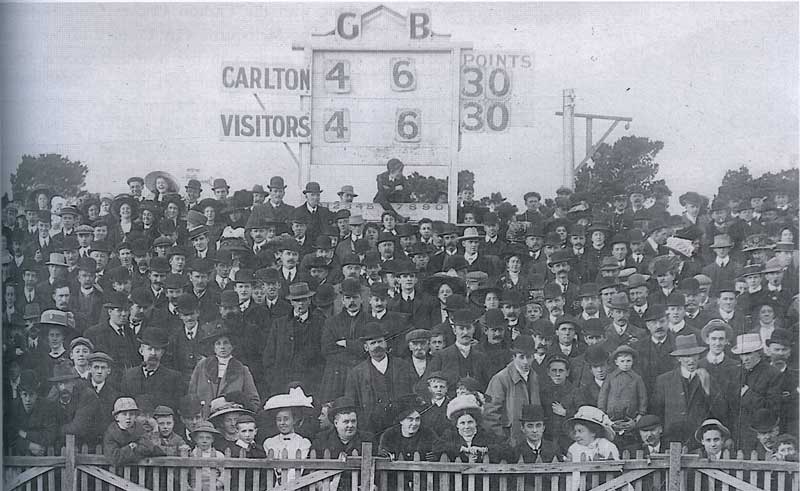 With his foot and ankle heavily bandaged, Martin hobbled out on to the field for the second half, although he was all but immobile. There were no reserves in 1910, so he had to stay in the game to at least occupy a defender. Still, Essendon played with verve to match the Blues, and at three-quarter time the Same Old were in front by a point.

The first ten minutes of the last quarter were the best of the match, as time after time, attacks were repulsed in the teeth of both goals. Then, in an extraordinary passage of play, Essendon swept the ball forward from deep in their defence, and a long kick to full-forward cleared the pack. It hit the ground, bounced between two defenders, and landed at the feet of Martin – who soccered it through to put the Same Old ten points up.

A few minutes later, in similar circumstances, Andy McDonald ran onto the ball at half-forward for Carlton and punted it long to the square. The pack flew high but missed it, and the ball bounced at a right angle and rolled between the posts for full points. It was a lucky goal alright, and it lifted the Bluebaggers with only minutes left. Carlton attacked incessantly, allowing Marchbank, Clancy and Wells to take shots in the dying minutes without success, before the final bell rang out across the ground to give Essendon victory by one point.

Despite this narrow loss, Carlton’s healthy percentage of 162.8 saw the Blues retain top spot on the ladder ahead of Essendon, with Collingwood and Geelong making up the four. University sat fifth, ahead of Richmond and South Melbourne. 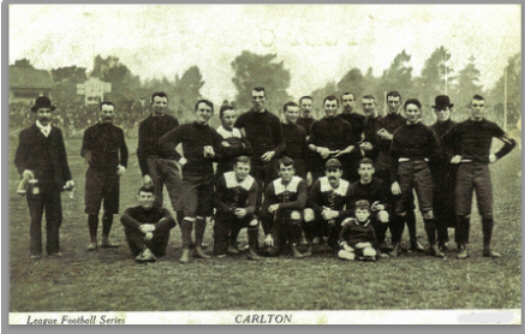 This photo shows the location of the Princes Park scoreboard in the background.
This team photo is believed to be from 1910, but we do not know which match.
However, it may predate 1910 as the monograms are absent from the guernseys.
The mystery surrounding this image continues, the club adopted white shorts and discarded the blue and white socks
for all navy socks from April 1905. 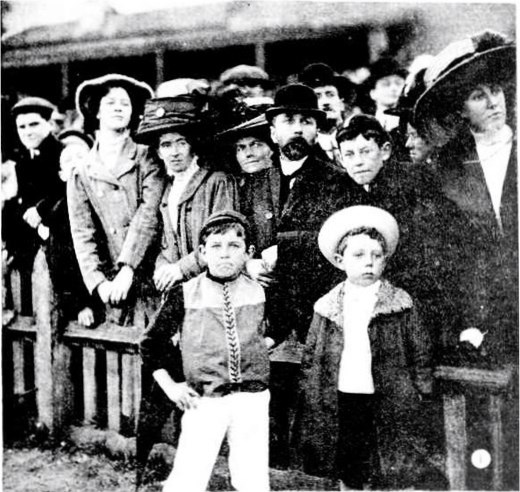 Junior lace-up guernsey. Bad luck if you are standing behind those ladies' hats! - Weekly Times June 18

1981 Grand Final - Alex Marcou watches the footy whilst on the ground.