BOG in our first Premiership 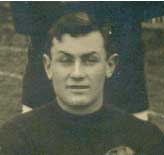 Had there been an equivalent of the Norm Smith Medal available on Grand Final day in 1906 (when the Carlton Blues began an unprecedented run of three successive Premierships) that honour would have surely gone to our brilliant 24 year-old half-back flanker, Billy Payne.

A pacey, long-kicking, sometimes flamboyant defender, William John ‘Billy’ Payne was one of ‘Jack’s Lads’ - that list of players hand-picked and personally recruited by Carlton coach Jack Worrall, with one aim in mind – to win a flag for the Carlton Football Club.

Billy was convinced (and no doubt financially coerced) by Worrall to swap from VFA club Footscray to the Blues, and made his debut in a winning home match against St Kilda a week prior to the finals in 1904. His second game was a narrow win against Essendon in a semi-final, and his third was the Blues’ 1904 Grand Final defeat by Fitzroy.

Two years later, Worrall’s vision, discipline and somewhat controversial methods were vindicated when his team clicked into top form. The Blues lost only three times in 1906, before brushing aside Fitzroy to win the club’s precious first Premiership by 49 points. In a very even team performance, centreman Rod McGregor’s pinpoint passing was a highlight, but it was Payne’s spectacular marking and skill at ground level that thrilled the crowd of 44,437.

In 1907 and 1908, Carlton completed the first hat-trick of VFL Premierships, before losing by an agonising two points to South Melbourne in 1910. Alternating between his favourite position on a flank, and stints at centre half-back and full back, Billy was a cornerstone of a great Carlton defence throughout those famous years. Never a close-checking type, he took pride in his ability to beat his opponent one on one, and loved the opportunity to set up play with a long pass to a leading forward. All this would appear to have made Payne a likely occasional forward, but he apparently rebuffed all efforts to play him near the goals.

The VFL allowed individual numbers on players’ guernseys during the 1911 final series, and continued with the popular innovation in 1912. Billy was the inaugural wearer of our number 2, when Carlton lost the 1911 first Semi Final to eventual Premiers Essendon. He then switched to number 16 for 1912.

Part way through that year, Billy became involved in a dispute with either his new coach (and former team-mate) Norman Clark, certain members of the club committee, or all of the above. The exact circumstances are unclear, but it seems that Billy felt that he was being treated unfairly. Sadly, he walked out of the club and never played again. Following his departure, Carlton slid from third place in 1912, to sixth in 1913.

May 3 1913, The Age reported that W. Payne had been granted a transfer to South Ballarat.

Billy Payne, the first in a glorious line of Carlton stars to be awarded Best On Ground honours in a Grand Final, passed away on the 22nd of July, 1967 aged 85.