A single season ends with scandal... 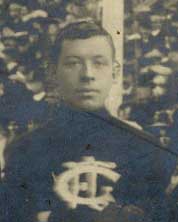 
Precious little is known about Doug Fraser, apart from his physical stature and his playing record at Carlton. What we do know, however, is that he was a central figure in one of the most sensational episodes in the early days of the Victorian Football League.

Fraser was born in Brunswick, and was recruited from VFA side Yarraville in 1910 (previoulsy played at Subiaco), joining a powerful Carlton side that had been Premiers in three of the previous four years. Carlton finished on top of the ladder yet again that season, and were due to meet South Melbourne in the second semi-final. But on the morning of that match, the Blues shocked the league by announcing that three of its players; Fraser, Alex “Bongo” Lang and Doug Gillespie, had been dropped from the team. No reasons were given, yet strong rumours were soon circulating that all three had been bribed to play poorly against the Bloods.

The weakened Blues subsequently fell to South by 12 points, and Carlton and the VFL both launched enquiries into the matter. Under VFL rules of the time, Carlton were still guaranteed a berth in the Grand Final because they were the minor premiers - so when South lost the preliminary final to Collingwood, it set up the first Blues-Magpies Premiership decider (and incidentally, the only one Collingwood has ever won from us).

In the days before the Grand Final, Doug Gillespie was found innocent of the charges against him, while Fraser and Lang were deemed guilty and suspended for five years each. Gillespie was able to reclaim his place in the Grand Final team, but the unsettled Blues were beaten by 14 points.

Bongo Lang served out his time, and eventually returned to senior football at Princes Park. Gillespie spent a year at VFA club Brunswick in 1911 before resuming his career at Carlton, but Doug Fraser never played VFL football again. For more details on Fraser's background and this scandal, click here.

Doug Fraser had a run-in with the law.
He was arrested in January for using obscene language in Anderson St. Yarraville.
To read the Court's proceedings click here> http://nla.gov.au/nla.news-article73478004

Articles: Doug Fraser and the Bribery Scandal of 1910