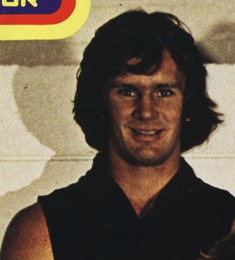 Originally from Maryborough / Royal Park, Russell "Autumn Leaves" Ohlsen played 47 games and booted 25 goals for the Blues in four seasons (1975 to 1978). He played his best football as a ruck-rover, but was unable to cement a regular place in the side.

Perhaps best remembered for his extensive tattoos, he was later cleared to Collingwood, where he was part of their losing Grand Final teams in 1979 and 1980. During the 1979 Grand Final, Ohlsen was almost best afield when he suffered a broken jaw at the hands of Trevor Keogh.

Ohlsen wore No.54 in 1975 whilst playing reserve grade for the Blues.

In 1982, Ohlsen headed off to VFA Club Preston after playing a further 50 games and booting 22 goals for the Magpies from 1979 to 1981. Ohlsen was enticed to the club by Collingwood team-mate Ray Shaw and his 51 games included the 1983 premiership, but he missed the following season's flag through injury and finally retired mid-way through 1985 after he was restricted to just four games.

Ohlsen headed back to where it all began at Maryborough Football Club for the 1985 season.