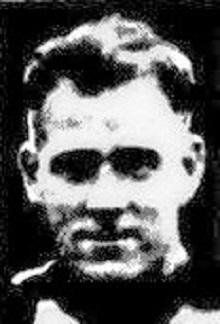 Very much a local boy, Walter Robert “Wally” Mutimer was born in North Carlton in 1907. By his mid-twenties, hard physical labour during the early years of the Great Depression had given him a powerful physique, which he used to advantage most weekends as a pack-busting follower-forward for VFA club Brunswick.

In 1934, Carlton offered the Magpies the huge sum of 100 pounds ($200) as a transfer fee for three players; Wally Mutimer, Frank Anderson and Dave Arrell, all of whom had impressed club scouts. At a time when five pounds was a good weekly wage, it was an offer too good to refuse for Brunswick, so all three young men duly crossed to Princes Park. Mutimer was allocated Carlton’s guernsey number 3, and made his senior debut for the Blues in a home match against Hawthorn in round 12, 1934. Deputising for the injured 'Soapy' Vallence at centre half-forward, Wally’s unselfish play helped his new team to a huge victory by 79 points, with Frank Anderson posting six excellent goals at full-forward. When Vallence returned the following week however, Mutimer was omitted and didn’t get another chance at senior level until round 1, 1935.

Wally played ten games in his second season, and kicked his first career goal in Carlton’s round 2 demolition of Hawthorn at Glenferrie Oval. But the year ended on something of a sour note when the Blues finished third, and Mutimer was left out of the side that fell to Richmond in the first Semi Final. In 1936, Wally seemed to be still out of favour when he had managed only two senior appearances by late June, and it was later revealed that he had asked for a clearance to Fitzroy. Carlton refused, insisting that he play out the year, and he responded with a big game against South Melbourne round 11. From then on, he was an integral part of the Blues’ on-ball division for the rest of the home and away rounds, and a good contributor in his first career final. Facing Melbourne in a Semi Final on the MCG, Carlton selected Mutimer in his customary role of follower, changing on a half-forward flank. The Blues were clearly the better side after half-time, but inaccuracy around the goals cost dearly, and the Demons won by 9 points.

Soon after that defeat, Wally was granted his clearance to Fitzroy. With the Maroons, he played another 27 games and booted 10 goals over 1937-38, bringing his VFL career total with both clubs to 48 games and 16 goals.

The 514th player to represent the Carlton Football Club, Mutimer was 77 when he passed away at Parkville on October 14, 1984.

Former Carlton and Fiztroy player Wally Mutimer took over from Harry Vine as the as chief bootstudder at Carlton at the start of the 1943 season.
(Ref: Boyles Football Photos, Sporting Globe)