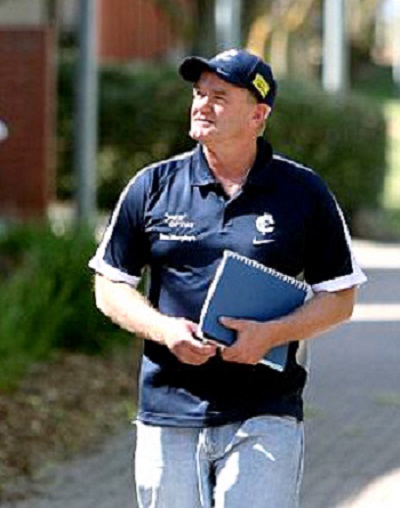 By late 2003, Wayne Hughes had been working at the Fremantle Dockers for some time, holding the responsibility of tracking the development of the Dockers’ Victorian-based players. He had made a good impression and was widely respected, so it came as no surprise when he was head-hunted by Carlton to be the Blues’ Manager of Recruiting.

Carlton’s lack of success in the decade prior to Hughes’ arrival placed him squarely in the spotlight at draft time - especially because of the sense of failure that was permeating the club at the time. The only upside was that as a perennial bottom-four team, Carlton was eligible for a string of early National Draft picks, including three successive Number One selections in 2005, ’06 and ‘07. In general, Hughes got them right, by calling up Marc Murphy, Bryce Gibbs and Matthew Kreuzer respectively. Other notables he brought to Princes Park before and after that trio included Josh Kennedy, Michael Jamison, Chris Yarran, Andrew Carrazzo and Sam Jacobs.

However, there were also a large proportion of dud selections, and as the decade progressed criticism of Carlton’s recruiting department in general – and Hughes in particular – steadily mounted. At the conclusion of the 2011 season – after Carlton was knocked out of contention in the second week of the finals – Blues coach Brett Ratten announced that Hughes was stepping down in favour of his senior assistant, Shane Rogers.

Hughes continued in a support role to Rogers until early 2014, when he parted ways with the Blues to take up a senior position in the recruiting department at St Kilda.