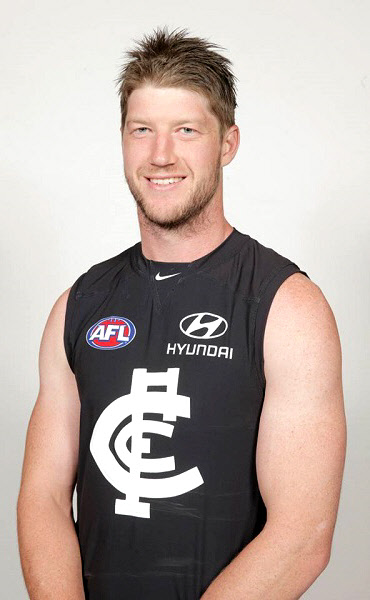 Sam Rowe came to the Blues as a mature-age ruckman-forward from the Norwood Football Club in South Australia in 2011. Carlton Recruiting Manager Wayne Hughes admitted to being a fan of the former Sydney Swans rookie, and had no hesitation in picking him up with the club’s second selection (number 44) in that year’s National Draft.

Originally from North Albury, Rowe announced himself as a potential League footballer with the Murray Bushrangers Under-18s, when he represented NSW in the 2005 National Championships. Later that year, he was rookie-drafted by the Sydney Swans in the eighth round at pick 62. He spent two years on the Swans' list without progressing through to senior level however, and in 2008 accepted an offer to join Norwood.

With the Redlegs, Rowe steadily matured and in 2010 he was approached by Carlton. Sam was thrilled to be offered another chance to play AFL football and would have joined his former team-mate Nick Duigan at Princes Park the following year - had the subject of an unfinished apprenticeship not arisen. “In fairness to him, when we went through the interviewing process,” said Hughes, “he had a year to go as an apprentice carpenter. It was going to be completely unfair to him, from a long-term point of view, to take him out of that.”

Hughes knew it was a calculated risk to pass on Rowe, knowing other AFL clubs were well aware of his ability – but no other AFL club came calling, so big Sam became a Blue twelve months later than first anticipated. Although he suffered a pre-season shoulder injury that temporarily set him back, he was just starting to showcase his potential with the Northern Blues by May 2012, when the shock news broke that the 25 year-old had been diagnosed with testicular cancer.

Carlton coach Brett Ratten expressed the general reaction by everyone at Carlton by saying; "Football's a great game, and we love being a part of it ... (but) we just want Sam to go through this, get himself right - and if it takes a little longer than we first thought, well so be it.” During urgent surgery, a tumor was removed that was later diagnosed as grade one (the least dangerous) before Rowe endured the discomfort of a six-week course of chemotherapy.

After missing more than six months of football, Sam was given the all-clear to resume training before Christmas 2012, and completed a full pre-season program. Under a new senior coach in Mick Malthouse, the Blues proved to be one of the form sides of the 2013 NAB Cup pre-season competition, and Rowe was one of his team’s standout performers. Assistant coach John Barker summed up Sam’s attributes like this; "He is pretty popular around the club. He has a fair bit to say on the track, and provides that energy and spark in spades. When the ball comes into his area and he doesn't mark it, it comes to ground," he said.

All those factors came into focus when Rowe was selected to replace the injured Shaun Hampson and play his first senior match in a finals-like atmosphere at the MCG against Collingwood in round 2, 2013. The game attracted an enormous crowd of 84,000-plus, and they were treated to a classic contest. The Blues led narrowly for most of the first three quarters, only to falter in the last few minutes to be beaten by 17 points. Rowe was handy on debut, collecting 11 possessions, 4 marks, 8 hit-outs and his first career goal from a calmly-taken set shot in the third quarter.

Sam went on to play another nine games over the season, highlighted by Carlton’s victory over St Kilda in round 16. Helping celebrate his ruck partner Matthew Kreuzer’s 100th game, Rowe hauled down six marks and kicked three goals as the Blues easily accounted for the Saints in an excellent Saturday night’s entertainment at Docklands Stadium. Then at season’s end, to the delight of everyone involved, Sam signed a contract extension that paved the way for one of the feel-good stories of 2014.

Carlton lost to Port Adelaide in a setback to start the year, so Rowe replaced Matthew Watson for the following week’s match against Richmond at the MCG, and this time was asked to play in defence. It certainly looked like a gamble, but it soon paid off. Although his side was beaten, Rowe showed that he was up to the task. Calm under pressure, and ready to back his judgement and strength in the air, Sam just got better as the night unfolded and from then on, didn’t miss a game for the rest of the year.

Although he was taught a harsh lesson by Geelong’s Tom Hawkins (who kicked four goals on him in one quarter in round 12) Sam learned quickly, and kept the Big Cat goalless in their return match. He went on to rack up more “one-percenters” (spoils, smothers, blocks and shepherds) than any other Blue over the season (including a massive 17 against West Coast in round 6), and ended his break-out year in fifth place in the voting for the John Nicholls Medal. He was also a hugely-popular winner of Carlton's Most Improved Player Award.

Carlton’s legion of supporters expected resurgence from their team in 2015, but all too soon they were plunged deeper into despair. By late May, one win in the first eight games sounded the death knell for Malthouse’s brief stint as coach of the Blues, and he was replaced by his assistant Barker in a caretaker role. Then champion Chris Judd wrecked a knee, and the season disintegrated into abject misery.

While there weren’t many positives to be found after the Blues were awarded the 2015 wooden spoon, Rowe’s steadiness in defence was one of them. Under siege week in and week out, Sam gutsed his way through a horror season to play 20 games. His stats weren’t huge, but rarely were his opponents either, and Carlton’s defence was tissue-thin when he wasn’t there.

In 2016, former Hawthorn assistant coach Brendon Bolton took charge of the Blues and lifted the club to seven wins and 14th on the ladder. Rowe had another consistent season in Carlton’s defence, where he played every game and his massive season total of 215 one-percenters was the most in the competition. Then in September, he polled well again in the John Nicholls Medal, finishing equal-sixth with Matthew Wright.

Rowe would be a first 22 player all 2017, mainly in defence, before rupturing his ACL mid season. The long road to recovery saw Rowe miss 11 months of football before returning early in 2018 and managing a respectable 17 games for the year. Despite his clear leadership in defence as our backs were decimated with injury, and finishing in the Top 10 of the B&F, the Blues announced in October that Rowe would be delisted. Rowe sat on 99 games, much like former Blue Brad Fisher, as he finished up at the Blues.

A hard working man-mountain an key defender in a difficult era for Carlton, Sam Rowe delivered against adversity - over & over again.

Rowe would sign on with East Doncaster FC in the Eastern FL, but a turn of fate allowed St Kilda to sign Rowe up for the 2019 season. The Saints were able to use a position on their playing list under the newly introduced pre-season supplemental selection period (SSP). With the Saints Dylan Roberton announcing he will stand aside in 2019 due to health related conditions, the Saints signed the former Carlton defender. Rowe was selected for the Saints final game of the year which enabled him to reach a well deserved 100th game at AFL level. Rowe was delisted at seasons end, but a long and hard earned journey for Big Sam!