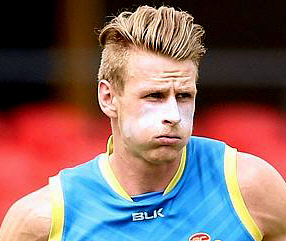 Former Gold Coast ruckman Daniel Gorringe was part of a large influx of recruits to Carlton ahead of the 2016 season. Back in 2010 he had been described as the best junior ruckman in the country when he was acquired by the Suns at selection 10 in the National Draft, but his five years on the Gold Coast had not panned out as either he or the club had hoped.

A South Australian by birth, Gorringe rose to prominence as a junior with the Norwood Football Club. Blessed with natural athleticism and good aerial skills, he represented his state at Under-18 level and was selected as an All-Australian in 2010 before being picked up by the Suns. He made his senior debut in round 3, 2011 and went on to play seven matches in his first year.

Over the next four seasons however, ankle and Achilles tendon injuries, plus the emergence of Zac Smith and Tom Nicholls, restricted Gorringe to only 15 more games. By late 2014 his confidence had sunk to a low ebb, so he listened hard when Port Adelaide approached him with an offer to return to his home state. After agreeing on a handshake deal, he was already arranging to move when Port Adelaide reneged on their pledge and began courting Essendon’s Patrick Ryder instead – leaving Gorringe “disgusted.”

At the end of 2015, Gorringe’s contract at Gold Coast expired and he was told that he was no longer required. Meanwhile, Carlton had dispensed with Robert Warnock and needed a replacement. Blues List Manager Stephen Silvagni said that the big South Australian was just what was needed. “To bring in another young talent who is eager and hungry for more senior opportunities only strengthens our playing list," he said, “and the fact he’s already had five years of AFL-system experience is a real bonus.”

Daniel had to wait until round 9 of 2016 to play his first match for the Blues, against North Melbourne. In a tall forward-relief ruckman role, he gathered 13 possessions, 7 hit-outs and kicked an acrobatic goal, but was given a harsh lesson by the Shinboners’ big man Todd Goldstein. After playing the next three matches in succession – including victories over Geelong and Brisbane in rounds 10 and 11 respectively – he was omitted in the wake of the Blues' defeat by St Kilda in round 12. Then later in the year, while playing for the Northern Blues, he suffered a serious hip injury and was sidelined for the latter part of the season.

Gorringe's luck with injuries did not change through 2017, when at the end of the year, he retired from the game at the early age of 24.

Daniel Gorringe signed to play for Eastern FL club Balwyn in the 2018 season but when former coach Rodney Eade was appointed coach he immediately departed and signed with Division 2 club Park Orchards FC.

2022 - Gorringe lined up with Greenborough in the Northern FL.