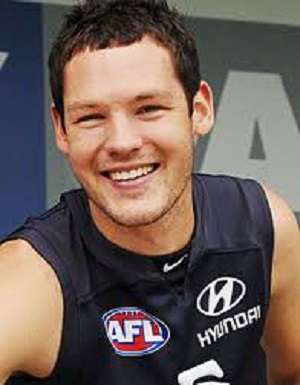 The tallest man to pull on the famous navy blue guernsey since Justin Madden more than a decade earlier, Robert Warnock was prised from the grip of the Melbourne Football Club by the Blues in the highest-profile deal of Trade Week 2008. At 206 cm (or 6 feet, 9 inches) he was the most keenly sought-after big man available, and Carlton went after him hard. At the same time, Warnock's older brother Matthew was already established with the Demons, and the opportunity for the siblings to play together was a strong incentive – until the Blues came up with a more attractive offer. Fremantle was handsomely compensated with selections 24, 56 and 72 in the National Draft, and Warnock became a Blue on a 4-year contract.

Three years beforehand, 18 year-old Warnock had been drafted by Fremantle from the Sandringham Dragons at number 42 in the 2005 Draft. The Dockers were patient, and Robbie spent all of 2006 as a development year in the WAFL with West Perth. In 2007, a groin injury to Fremantle’s giant ruckman Aaron Sandilands opened the door to senior selection for Warnock, allowing him to make his AFL debut for the Purple Haze in round 6 of that season against Brisbane.

Over 2007-08, Warnock chalked up 19 games and four goals, but by late in his third year it was obvious that he was unsettled and missing home. He requested a trade back to his home state, and to their credit the Dockers didn’t stand in his way. By then, Rob had shown enough potential at Fremantle to get Blues devotees genuinely excited – although unfortunately for all concerned, his early days at Princes Park proved an anti-climax.

During his first pre-season, Robbie suffered a stress fracture in his left foot, leading to complications that saw him placed on the long-term injury list in March, 2009. He missed that entire year of football, and didn’t get to pull on his number 11 guernsey for the Blues until the opening round of 2010, when Carlton faced traditional rivals Richmond on a Thursday night at the MCG, and handed the Tigers a 56-point hiding. Playing off the interchange bench and sharing his debut with two other imports in Brock McLean and Lachlan Henderson, Warnock alternated with Matthew Kreuzer in the ruck and gave the Blues’ potent midfield runners an armchair ride.

Rob warmed the bench in all of Carlton’s first five matches, before being sent back to the Northern Bullants for a breather. But his replacement, Sam Jacobs, seized his opportunity and played some terrific football to keep Warnock out of the senior side until mid-June, when a knee injury to Kreuzer forced Rob’s recall for round 17. From then on, he and Jacobs shared the team’s ruck responsibilities for the remainder of the season – including Carlton’s desperately close loss to Sydney in a thrilling Elimination Final.

In the off-season, Carlton’s ruck stocks – potentially so strong half way through 2010 - were severely depleted by Kreuzer’s knee reconstruction, and the disappointing defection of Jacobs to the Adelaide Crows during Trade Week. With his height and endurance, Warnock was always going to be an effective tap ruckman, although many Blues supporters were critical of him because he didn’t take enough marks around the ground, and because he was decidedly shaky when shooting for goal.

Still, the Blueboys got off to a good start in 2011, losing only once in the first eight rounds. On a Friday night in late May, the team faced their sternest test against an undefeated Geelong at Docklands Stadium. In the last minutes, Carlton trailed by 3 points as they swept into attack, and a long bomb landed inside the attacking 50-metre arc. A big pack flew for the ball, and Warnock was felled by a blow to the back of the head from Geelong’s Corey Enright. Rob was awarded a free kick only 20 metres out on a slight angle, but he missed the shot badly and Carlton was beaten. That incident gave his critics new impetus, until it was realised that he had been heavily concussed by the hit, forcing him off the field completely for a fortnight.

In Warnock’s absence, Shaun Hampson stepped up to lead Carlton’s rucks with such effectiveness that even when Rob regained full fitness, he couldn’t displace the big Queenslander from the lead ruckman role. Then Hampson himself went down with a serious knee injury, and Warnock was recalled for Carlton’s round 14 match against West Coast. From then on, Robbie shouldered the bulk of Carlton’s ruckwork, and rarely failed to give his potent midfield first use of the football. Late in the year he hit a rich vein of form, and two of his best games were a huge Elimination Final win over Essendon, followed by a desperately close Semi Final loss to West Coast.

In the aftermath of those matches, more surgery was required on both of Warnock’s shoulders, bringing a delayed start to his 2012 pre-season preparation. It was late May before he earned a recall, for the Blues’ crunch game against last-placed Melbourne. By then, Carlton was a team in trouble, reeling from a raft of injuries to key players, and coming off a devastating 69-point defeat by Adelaide the previous week.

A lack of tall options led Blues coach Brett Ratten to include all three of his front line ruckmen in the team to meet the Demons. Kreuzer and Hampson played forward, while Warnock competed around the ground. Carlton got back on track with a relatively easy ten-goal win, but afterwards opinions were divided as to whether the tactic could be viable in the long-term. 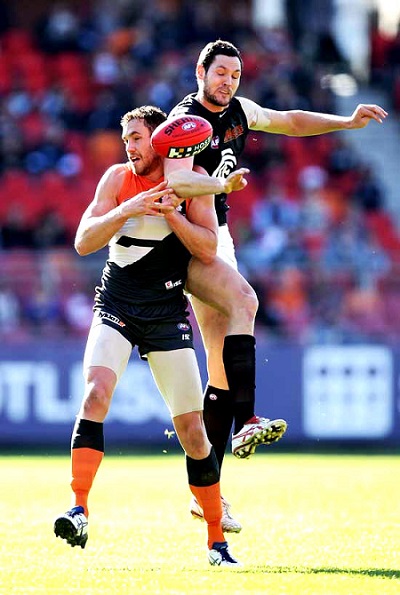 Warnock maintained his place in the side for the next five weeks, including the Blues’ shock loss to Port Adelaide in round 10, during which he racked up 42 hit-outs. A month later in early July, he quashed rumours that he was seeking a trade out of Princes Park by signing a new 3-year contract – only to be reported on a rough conduct charge while playing in the VFL for the Northern Blues against Frankston. A guilty plea at the tribunal still cost him two matches, and by circumstance, brought an end to his season.

Whilst serving his suspension, Warnock sought treatment for pain and stiffness in his right shoulder, and scans revealed floating bone fragments in the socket. Carlton’s finals hopes were all but shot by late August, so the club’s medical staff recommended an immediate arthroscope to clean out the joint. The procedure brought a premature end to another season for Robbie, but gave him the best possible opportunity to be fit and ready for the following year.

Although he was indeed ready to resume when Carlton began 2013 under their new coach Mick Malthouse, Warnock wasn’t selected for the first three games. Instead Matthew Kreuzer led the Blues ruck division, before he broke a thumb during round 3 against Geelong. Warnock was then called up in Kreuzer’s place, and turned in one of his best performances in round 7, when St Kilda edged out Carlton by 7 points in an important Monday night match at Docklands. Rob won 42 hit-outs that evening, while gathering 14 disposals, 5 marks and 5 tackles - only to be struck down again by a knee injury in Carlton’s victory over the Brisbane Lions in round 9. He was back again by August, in time to be heavily involved in the Blues’ windfall finals campaign, and ended the season on the cusp of his 50th senior match for the club.

Warnock averaged 34.5 hit-outs in his 12 matches in 2013, ranking him third in the League behind the Bulldogs’ All Australian Wil Minson, and North Melbourne’s Todd Goldstein. However, his average disposals (9.2) marks (1.2) and tackles (2.4) made less flattering reading, and the debate flared again – in the modern game, was this good enough?

Eventually, that question seemed to be answered in the negative, but not until 17 weeks into Carlton’s miserable 2014 campaign, by which time the Blues had won only five matches and were languishing in 14th place on the ladder. In 16 games, Warnock’s statistics had declined in most categories to average 34 hit-outs, 8.6 disposals, 3.4 clearances and 1.8 tackles per game. He had taken only 14 marks for the season, and kicked 3 goals before the match committee lost patience and omitted him from the team in favour of mature-age rookie Cameron Wood – who made the most of his opportunities and played out the year as the Blues number one ruckman.

Carlton’s 2015 season will go down in the club’s history as one of the bleakest on record, with Warnock’s fortunes mirroring those of his club. After just one win in the first ten rounds, the Blues lost champion Chris Judd to a career-ending knee injury, and Malthouse was sacked. Warnock had played only two senior games for the year by then, and in the second of those – against Geelong in round 8 – he dislocated his problematic right shoulder again. With nothing worthwhile at stake, it was decided that his season was over, and he was sent to hospital for immediate surgery.

Then, in October of that year, after Carlton had suffered the humiliation of finishing last on the ladder for the fourth time in thirteen years, Warnock was one of eight Blues who were told that their services were no longer required.

Warnock would retire from the game after his delisting.