Ahead of this Saturday evening match at Docklands, few commentators gave Carlton much chance against an undefeated North Melbourne – especially since the Blues had been devastated by injuries to three key big men. Those fears proved well-founded when the Northerners seized control from early on, and crushed their rivals by 67 points in their best start to a season in 92 years. 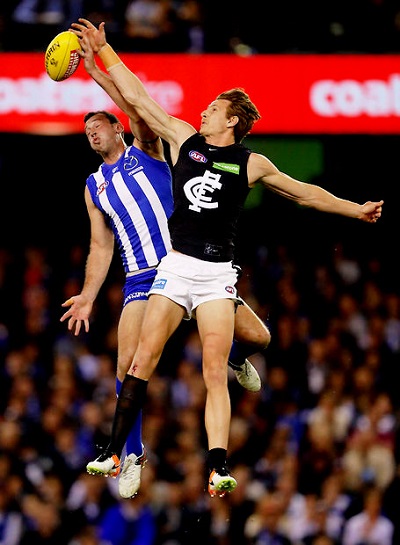 Although Carlton’s recent form had also been good, particularly in the previous week’s fourth successive victory for the year over Port Adelaide, it had come at a heavy cost. Levi Casboult, Matthew Kreuzer and Michael Jamison were the headline casualties, leaving the Blues to call on Jacob Weitering, Simon White, and Carlton debutante Daniel Gorringe as replacements. Of this trio, former Gold Coast Sun Gorringe faced the most monumental task when he was asked to take on North’s outstanding ruckman Todd Goldstein, who was enjoying career-best form. There were more headaches in defence, where the Roos’ three-pronged attack of emerging star Ben Brown, veteran Drew Petrie and former Blue Jarrad Waite posed a real threat for an under-sized backline.

From the opening bounce, Carlton started brightly and Dale Thomas kicked the first goal of the match after taking a courageous mark deep in the left forward pocket. As he jumped for the ball, Daisy was shoved hard in mid-air, sending him crashing into the point-post. But he recovered, and, aided by the 10-metre exclusion zone, snapped truly to put the Blues in front for the first and only time. Meanwhile, Goldstein was already influencing the ruck duels, having a hand in each of North’s first three majors. Late in the quarter, Carlton’s second goal came after a scintillating passage of play from Weitering and Liam Sumner, whose long kick was marked and converted by Andrew Walker. Even so, the Roos soon settled, and at quarter-time they were in control by 19 points.

Carlton fought hard in the second term, but with Goldstein ruling the clearances, North turned the screws and only their inaccuracy around the goal-face restricted their advantage to 35 points at the long break. Bryce Gibbs, Sam Kerridge, Sam Docherty and Ciaran Byrne stood out for the Blues, while Kade Simpson’s run-down tackle – and goal from the resulting free-kick - kept the flames of resistance burning.

If he hadn’t already done so, Goldstein stamped his authority on the game in the first 20 minutes of the third quarter. Continuing to dominate the air, he presented time after time in attack and kicked three successive goals. Gorringe got one back for Carlton with some clever acrobatics right on the goal-line, and Liam Jones flashed into the play with a couple of strong marks to kick another two, but at three-quarter time the deficit had blown out to a huge 47 points and it was already a case of how far the Shinboners. Around the packs Gibbs and Ed Curnow continued to burrow in for their team, while Pat Cripps was busy in close, but seemed to be lacking his customary zip – begging the question - had he come into this match less than fully fit?

When the Northerners kicked the first two goals of the final term and took their advantage beyond ten goals, a rout was on the cards. Carlton showed real resilience right through to the final siren however, and although they were eventually well-beaten by 67 points, without Sam Docherty and Ciaran Byrne across half-back the margin would have been greater. Lachie Plowman and Jake Weitering kept Brown and Waite to two goals each and learned some more valuable lessons, while Simon White played an excellent negating role on Petrie and restricted the North veteran to just six disposals and no score. In the midfield, Bryce Gibbs battled the odds to be Carlton’s best with 29 disposals, 6 marks, 4 tackles (and five hit-outs as third man up) while Curnow, Kerridge and captain Marc Murphy kept plugging away.

Such was Goldstein’s dominance in this match, that had he been playing for Carlton, the result might well have been reversed. The big Shinboner racked up 19 possessions (11 contested) 5 marks, 5 clearances, 3 goals and 45 hit-outs in a commanding display that shut the Blues out of contention, and underlined how crucial he continued to be to North’s flag prospects.

As for Carlton, the Blues were now back in the pack, sitting 12th with a 4-win, 5-loss record, ahead of a return to Docklands in round 10 to play second-placed Geelong.

Winning Streak Endeth: Carlton was attempting a 5th win in succession for the first time since 2000, but failed.