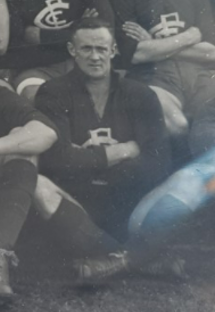 In a career that spanned just 64 days at the height of World War II, Jacob Ernest ‘Ernie’ Spence or as he was known to his mates 'Spanner' played four matches for Carlton, but was only on the field for the first bounce once. A lightweight winger from Yarraville in the VFA, he was 19th man in his first three appearances, and celebrated the third win of his career in his final game.

Spence started playing with North Footscray FC in the physically tough Footscray District FL in 1937 when he was 19 years old when they played their matches where the Old Footscray Hospital was built in Eleanor Street Footscray. One of three brothers who all signed up for wartime military service, Spence had had a crack at VFL football with Footscray earlier in his career, without progressing further than the Bulldogs’ Reserves. When war was declared, he joined the Royal Australian Engineers, who put his trade skills to work at their large Footscray workshops. During WW2 he served as a Sapper for the Royal Australian Engineers and worked at the United Malleable Engineering Company in Footscray. While playing for Carlton from 1944-46 Spence also played football with the United Malleable Engineering Football Club, these games most likely were played on a Sunday as it allowed him to keep playing football for Carlton on Saturdays.

Spence made his way to Footscray Football Club in 1943 where he played 7 Games with the seconds (there was a J. Spence who played with Footscray Reserves in the 1940 and 1942 seasons but cannot confirm if this was the same person). Ernie then joined Yarraville, and in early 1944, he found his way to Carlton. Wearing guernsey number 33, he was included in the Blues’ senior team as 19th man in the opening game of the season, when Carlton lost to South Melbourne in what proved to be Spence’s only defeat in navy blue. He waited a month for another opportunity, but was back on the bench when Carlton beat Richmond and Geelong in succession in rounds five and six.

Omitted again after that, Ernie spent three weeks cooling his heels in the seconds, where his consistency eventually earned him a recall to the seniors - in the starting 18 at last - for the home match against Fitzroy in early July. Named on a wing to partner Les McCann in the centre and Vin Brown, Spence enjoyed his third victory on the trot when Carlton cruised home by 30 points.

Although on paper it was an easy win, Blues coach Percy Bentley apparently decided that Spence’s effort fell short of expectations, and he was left out of the team again the following week. At some time between then and the end of the season, Ernie realised that his time was up at Carlton, and he headed back to the strong VFA competition to line up with Yarraville. He continued to play at Yarraville up until 1948, in this period he would 28 games and kick 46 goals, with 44 of those goals coming in the 1947 season.

In 1964 he took the honorary role as President / Player of the Williamstown Rovers FC that played in the Werribee Football League and in 1965 the team disbanded and he made his way back to North Footscray where he continued playing and was the reserves coach from 1968 to 1970. In 1971 he started playing with South Kingsville Rovers that were in the Werribee Leauge up until they disbanded in 1973 and he moved back to North Footscray where he retired as a player and was Head Trainer of the Club up until the early 2000's. He would be made President of the Footscray District FL in 1990.

Ernie Spence was interviewed for an article with The Age's Ron Carter regarding his footballing career, the interview took place during the week of his 200th Official game for North Footscray in 1970. Overall Ernie Spence would play in excess of 600 games throughout his career.

In 1973 Spence finally decided to retire from playing football at the 'tender' age of 55, and no doubt with much relief to his wife who no doubt would've been encouraging this to happen for a few years!

Further information and images can be found here. https://www.bayanne.info/Shetland/showmedia.php?mediaID=1665&medialinkID=2284