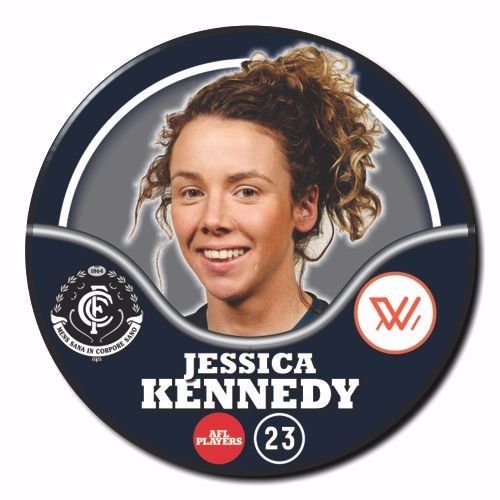 With pace to burn, Jessica Kennedy will add speed to Carlton’s midfield in 2017. Kennedy’s ability to find her way through contests and emerge with the ball makes her a damaging player. “Jess had an amazing season in 2016, taking home the best-and-fairest award at Bendigo Thunder,” women’s senior coach Damien Keeping said. “With the capability to win her own ball, she will greatly add to our mid stocks.” Kennedy was recruited to the Blues as a free agent after the AFL Women’s draft.

She was recruited by Carlton as a free agent following the 2016 AFL Women's draft. She made her debut in Round 1, 2017, in the club and the league's inaugural match at IKON Park against Collingwood. Kennedy finished 2017 having played in four matches with Carlton. She was subsequently delisted at season's end. Kennedy joined Richmond's VFL Women's side for its first season in 2018 and was named the club's first women's team captain. She won the inaugural best and fairest award that season.

Kennedy making most of opportunity
''With pace to burn and excellent ball-carrying abilities, Jessica Kennedy has been a mainstay in the Carlton midfield in the first two rounds of the inaugural AFLW season. Kennedy joined the Blues from Bendigo Thunder, where she played with Sarah Last and Bella Ayre, as a free agent after the inaugural draft last year. “The draft was a pretty anxious two hours. It would of been lovely to have had some reassurance prior to the draft,” Kennedy said. “I got the phone call from ‘Burgs’ (assistant coach Graham Burgen) late in the draft, he said: ‘If nobody picks you up do you want to be a free agent for us?’ I was super happy to hear that.” Kennedy started at Bendigo Thunder in 2011 when the club decided to field a women’s team for the first time. She was up in Bendigo studying physiotherapy and the opportunity to be involved in something different was an exciting prospect for the young midfielder. Aside from playing for Carlton, Kennedy now also works as a physiotherapist, which has helped her appreciate the efforts of the support staff at the Blues. “I really enjoy my work, and I obviously see things on the other side, other sporting people coming in and getting treatment and knowing how hard I work to get them going and then seeing the flip side,” she said. Kennedy’s work rate in the midfield has often set the standard for the Blues. She averages nine disposals a game, and she’s also shown the advantages of her speed.

After impressing for the Blues in the first two rounds, Kennedy is looking forward to Round 3 and the challenges that face her fellow Game Changers. The girls face their first weekend of travel, paired with a clash against the top-of-the-table Adelaide Crows. “It’s a really good opportunity for us to go outside of Ikon Park, and meet a new challenge,” she said. “They’ll be different to what Collingwood and GWS have thrown at us, but I think to be the best you have to play against the best and their form is really good so it’ll be an exciting game.” The Blues defenders will have their work cut out for them again with Sarah ‘Tex’ Perkins and Erin Phillips showing how strong they are for Adelaide in the forward line, while Kennedy and the rest of the Blues midfield will be fighting hard to win the contested footy against the likes of Chelsea Randall and Ebony Marinoff. They’re challenges that Kennedy is confident the Game Changers will overcome to keep their unbeaten record intact. “The girls have come together really nicely and that continues to get stronger as the weeks go on. What our strength is in Round 3 will only get better - so bring it on.”'' - Lucy Watkin, Carlton Media February 15, 2017

Inaugural Carlton player Jessica Kennedy, was not re-signed by the Club at the end of the season during the four-day free agency period.