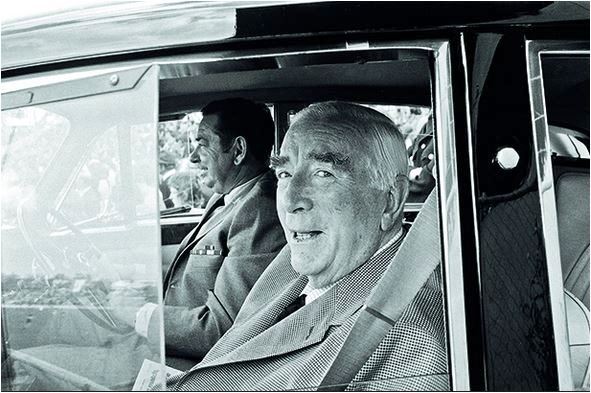 One of the most famous supporters of the Blues was Sir Robert Menzies, Australia's longest-serving Prime Minister. In his latter years the club had a special ramp built so that Sir Robert's Bentley could be driven up into the ground to allow him to watch the games from the comfort of his vehicle. He was acknowledged in the 1951 Annual Report as a visitor to the Richmond game on the 5th May.

Having Menzies and another Prime Minister; Malcolm Fraser, as Number One ticket holders has inevitably led to the view that Blues fans are somehow elitist. To the contrary, the history of the Club shows it is and always has been, both egalitarian and cosmopolitan.

On the eve of the 1952 football season The Argus' football writer Hugh Buggy wrote about the Prime Minister Robert "Bob" Gordon Menzies.

"Take the Prime Minister, Mr. Menzies. He makes no insincere pretence that he is interested in football in an academic way. He is an indefatigable supporter of Carlton, and he doesn't give two hoots who knows it. He goes to the football to see the Blues win.
For two emancipated hours that full throated bellow "Bowl 'em over Blues" is music to Mr. Menzies. He enjoys every minute of it.
For two hours he puts behind him all the problems and pother of politics. "Chook" Howell and Ollie Grieve and what they're doing are far more vital to the Prime Minister than what Dr. Evatt and members of the Opposition are saying or doing.
I was close to Mr. Menzies in the 62,000 crowd that watched one of the roughest grand finals of all time between Carlton and South Melbourne, at Carlton oval, in 1945. I studied his reactions to the slugging and to the play whenever players forgot their feuds and really played.
Mr. Menzies was then Leader of the Opposition, and he was in the "outer," where rain pattered steadily on his black Homburg. He began tense and pale as Carlton battled against solid opposition for that first break that is so important in a grand final. It was a long time coming, and "R.G." clenched and unclenched his hands, wiped his rain-wet face with a handkerchief, and swayed with the rocking crowd.
He was quiet but obviously tensed up until a South player felled Carlton's Ken Hands with a vicious upper cut.
Then we saw a new Mr. Menzies. His face flushed crimson. He stamped his foot. All his reserve vanished.
"That was atrocious" he yelled across the inclined plane of hats, "absolutely atrocious. That man should be rubbed out for life."
"You're quite right, Bob," shouted one solid Carlton supporter near him. "I agree with you for once, Bob. It was bloody murder. C'mon the Blues. Fling yer weight into these mugs."
Gradually Carlton got the upper hand. Mr. Menzies was able to relax, and he cheered wildly with the rest as the Blues fought to their seventh League pennant.
His loyality to Carlton Football Club has never waned since his University days. Somewhere about 1947, Mr. Menzies went down to Collingwood Town Hall to speak in support of a Liberal candidate in that stronghold of Labor. It was midwinter, and the football frenzy was upon us.
"I'll give you a good tip." Mr. Menzies added to a hostile audience. "The Liberals will win the election."
They merely guffawed in a good humoured way.
"Then my second tip." Mr. Menzies added, "is that Carlton will win the Premiership."
A blast of hooting swept up the hall and crashed around the stage. This was over the odds - rank heresy, treason, disloyalty in the nest of the Magpies.
But taking a long view of it, it wasn't bad tactics; no politician likes an apathetic audience."

Menzies in his Bentley at Princes Park.
1972 Rnd 22 Carlton vs Footscray. The Blues won by 3 points.
Photos Age/CFC article