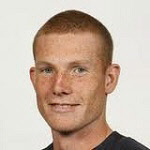 High on the list of “those who got away” from Carlton in the first decade of the current century sits Sam Jacobs, the 200 cm ruckman from South Australia who spent four years at Princes Park before he was lured back to his home state by the Adelaide Crows, and developed into a star. Nick-named “Sauce” (because of his bright red hair) Jacobs wore guernsey number 39 in 17 senior matches for Carlton over two seasons.

Originally from Ardrossan on the Yorke Peninsula, Jacobs was training with North Melbourne when he was drafted by Carlton with the Blues’ first selection in the Rookie Draft held in December 2006. Earlier that year, he had been a member of the South Australian Under 18 squad, while playing 13 games of senior football with his SANFL club Woodville-West Torrens. A strong-bodied and clever old style tap ruckman who read the play well and took a good mark, Jacobs was an interesting selection given the almost complete change-over of Carlton's ruck stocks from 2006 to 2007. Out went the retired Barnaby French and Adrian Deluca, as well as the delisted Chris Bryan, and in came Cain Ackland, Shaun Hampson and Jacobs, with potential back-up from another draftee, Cameron Cloke.

Big Sam had a solid first two seasons in the ruck for the Northern Blues over 2007-08, but then had to be delisted and redrafted, because Rookies were only allowed two years on an AFL club’s list. However, Carlton’s high opinion of him was confirmed when he was elevated to Nominated Rookie status, then selected for his first senior game in the massive 2009 season opener against Richmond on a Thursday night at the MCG. In front of a huge crowd of 87,000 at the home of football, Carlton unveiled five new faces in Jacobs, Jeff Garlett, Mitch Robinson, Aaron Joseph and former Melbourne utility Chris Johnson, before the Blues gleefully demolished the Tigers by 87 points.

“Sauce’ did well that night, collecting eight disposals and 20 hit-outs to advantage. He went on to play the next three games in succession, and celebrated his first career goal against Essendon in round 3, before suffering a severe foot injury a week later against Sydney. That injury kept him on the sideline for many weeks, although he did eventually return to play late in the season for the Northern Bullants. At the end of 2009, his potential was rewarded when he was promoted to Carlton’s senior list for the last 12 months of his existing contract.

As the 2010 AFL season got underway, Sam continued to impress – especially when Carlton’s senior ruckmen, Matthew Kreuzer, Rob Warnock and Shaun Hampson all suffered injuries at various times and Jacobs was called upon to shoulder the responsibility as the Blues’ number 1 ruck. ‘Sauce’ played 13 matches for the year, averaging 11 disposals, 22 hit-outs and three marks per game, including an outstanding effort in what turned out to be his last match for the Blues - the gut-wrenching, 5-point 2010 Elimination Final loss to Sydney. Sam won 44 hit-outs and 15 possessions that afternoon, in a new personal best.

However, shortly after that defeat, Jacobs requested a trade back home to Adelaide. Out of contract, and with Carlton having three other ruckmen on its list, he was in a powerful bargaining position. To many at Carlton’s dismay, a deal was done, and ‘Sauce’ departed from Princes Park in return for Adelaide’s selections 33 and 67 in the upcoming National Draft held in November, 2010. The Blues used those selections to recruit Patrick McCarthy and Andrew McInnes.

Since joining Adelaide, “Sauce’ Jacobs has evolved into one of the competition’s outstanding big men. In 2014 he racked up his 100th AFL game, and is already a two-time winner of the Showdown Medal - awarded to the best player on the ground in the annual grudge match between the Crows and Port Adelaide. Jacobs would have an outstanding career for the Crows that lasted from 2011 - 2019 in which he add a further 184 games and booted 45 goals. Jacobs would line up with the GWS Giants for the 2020 season. Jacobs didn't have the impact at GWS that he was hoping and only added a further 7 games and 2 goals during the 2020 season, he would announce his retirement after the final round. Whilst he may not have finished on a high, 'Big Sauce' still had a very successful AFL career with three different clubs.

Sam Jacobs has returned to Adelaide to take on a club engagement executive position at the Crows for 2021.