As season 2007 petered out on the field for the Carlton Football Club, many of our fans took great solace in observations made by people both within the club and in the press highlighting the youth of our teams. “Carlton is a young team!” we cried. “They’re the Baby Blues,” we wailed. Finally, after years of suffering and having limited draft picks, we had a good young list coming through and even better - they were getting game time in the seniors. Meanwhile opposition fans were busy suggesting we were only playing the kids to lose games – considered by some to be a form of 'tanking'. So we set out to find the truth of some of the statements made based on the end-of-season statistics.

This one is incontrovertible. In season 2007, Carlton fielded four of our youngest teams ever, with two still in the Top 20 of Carlton’s youngest teams in VFL/AFL history. A quick rummage through the young teams in history augers well for the Blues, with most of Carlton’s other 20 youngest teams taking the field in the years 1964, 1967, 1968 and 1970 – when the Blues were on the cusp of another glorious era with Premierships in 1968, 1970 and 1972. 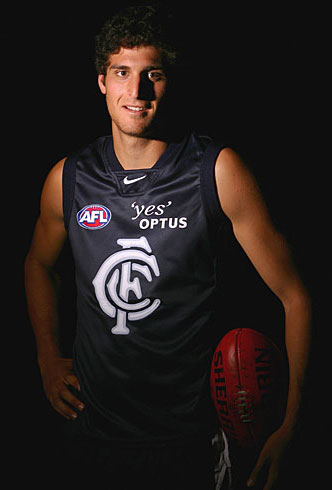 In fact, our Round 22 team was the fourth youngest in Carlton’s history with an average age of 22 years and 91 days, only 76 days on average older than our youngest ever team.

2. Carlton was younger than the opposition in 2007

This one is almost correct – in 20 of Carlton’s 22 matches, Carlton was the youngest team. Horribly, the two matches in which Carlton were not the youngest team were our two biggest losses of the year – against Hawthorn in Round 12 and Brisbane in Round 16. Something has to be said for the performances of not only Carlton in these games, but our opposition who were all in brilliant form. Or perhaps these points are entirely linked! This pattern also applies to games of experience, with Carlton fielding a team of lesser experience than the opposition except in those two big losses.

As we are all painfully aware, Carlton suffered 18 losses for the year, and following on from the above point, was the younger team in 16 of them. Now ‘being younger’ itself doesn’t really address the issue – it’s more about how much younger you may be. If we define ‘being younger’ as at least six months younger on average, then in two of those losses – the Geelong shellacking in Round 2 and the Roos thriller in Round 8 – the teams were pretty much on an even keel. Carlton was younger but not materially so.

In each of its four wins for 2007, Carlton was the younger team. On two of these occasions Carlton was on average at least one year younger; in the other two, six months younger.

3. Carlton just played a bunch of 18 year-olds to win games

To some footy pundits, the modern version of so-called ‘tanking’ could see a Club send senior players off for surgery whilst selecting younger players not ready for the challenge, lowering the chance of winning. When a juicy draft or priority pick is attached, this claim seems to gather fever-pitch strength (although if you took the picks away, it would be clearly list development!) To test this theory we had a look at the number of games played by Blues over 2005 – 2007 who were under the age of 21 at the beginning of each year.

In 2005, only 14 per cent of games played at Carlton were in that age bracket. In 2006, this increased to 23 per cent. But in 2007, one in every three games – 33.3 per cent - were played by those aged 21 and younger. This statistic highlights again that the Blues were definitely younger in 2007, but did this mean any first year draftee was getting a game?

As always, it’s more complicated than that. The proportion of games played by players 19 or younger hardly moved over the three-year period, suggesting that Carlton played a similar number of first-year draftees in each year (or those draftees played the same amount of games). Furthermore, the proportion of games played in the 20, 22 and 23-year age bracket hardly changed over 2006 to 2007. What does this mean? It means that a large driver of the additional games played under the age of 21 came from players in their second and third years, not from their first. This is evidenced by good games from Murphy, Walker, Blackwell, Kennedy (now departed), Russell, Bower and Betts.

Now let’s not doubt that more and more younger players were given games by the Club in this time period. From five Under 21’s in 2005, to 10 in 2006 and to 15 in 2007, the number of young players getting a game at Carlton has increased. But the simple fact is that this is due to young players, such as those listed above, demanding games as their career develops, and lets face it, the end of the career of more experienced players. The Blues have an emerging young list that will only get better with experience – add to that the recruitment of Judd and Hadley and we all have the right to allow ourselves more than a little hope for Season 2008.


Blueseum footnote: In 2008, Carlton will have the youngest list in the competition. For more information on this fact, click here