The Blue Birds were a cheerleading/dance troupe and a Carlton institution in the 1970s and 1980s, entertaining young and old alike on matchdays. You can be sure that the subject of the Blue Birds will invariably be brought up by any group of Carlton fans reminiscing about the good times of a couple of decades ago. A question often asked is “I wonder what they are doing now?” Well, we caught up with Elizabeth Loft who joined the Blue Birds in their last couple of years for a chat about her time at the Blues. 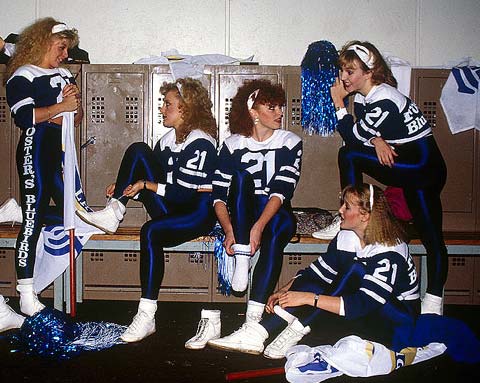 Were you a Carlton supporter before becoming a Blue Bird?

No, I had never been to a football match other than my dad coaching my older brother when I was young. I knew a little about Carlton because my brother and his group of friends where huge Carlton fans. Back then it was all about dance for me and nothing else.

Not really sure, I don’t think we ever talked about whether we supported the football. To a lot of us it was a job doing what we liked to do, Dance. I can remember a couple of girls knowing all the players so they must have been supporters.

Which years were you a Blue Bird?

Can you remember why and who disbanded the group?

We actually had the auditions and everything for the 3rd year (1987) and then we were advised that it wasn’t going ahead. No real explanation but the rumour was about money.

What was life like for a Blue Bird, you were a popular part of the club at the time, did you ever get asked for autographs?

I was very young and naive so I think a lot of what may have happened went over my head or I just didn’t notice. Looking back (and being a bit wiser) I can see how popular the bluebirds were.
I still have people say how they couldn’t wait for the bluebirds to come on, this makes you realise some people must have enjoyed it. I did give autographs and lots of waves as my brothers friends took up half the fan club at the time. Quietly I think he was proud to have one of his sisters in it.

Was the pay pretty good for an aspiring dancer?

Yes, at the time I thought it was fantastic as I was saving for my first car which I ended up purchasing mainly because of this job. Cannot remember exactly how much it was but we also got paid to rehearse.

Did you get to watch the games and enjoy them? Were there any games that were memorable for you?

The first year I cannot remember watching any of the games but the second year they brought in that some of us had to stay (maybe 5) in the stands each home match and cheer when Carlton got a goal. We had lots of fun at this time as we had a chance to catch up with some friends whilst we worked. I can’t say there were any memorable ones, footy still isn’t one of my favourite pastimes.

Did you train for your routines at the club on a regular basis or at a dance studio away from the club?

I don’t think we ever trained at the club it was always at the dance studio, once you learnt a routine you could perform it anywhere as long as you knew which way the front was.

Are there any funny stories from the time that you remember fondly?

The funniest thing for me was walking down the stairs onto the ramp I would be giving hi 5’s to everyone and I thought it was hilarious as I really didn’t know anything about football so the environment was all new to me.

Not that I know of but I would love to have a reunion. One of the girls has a dance school but we haven’t caught up. I think we are both extremely busy with families and dance schools and not much time for anything else.

Was there any interaction between the Blue Birds and the players?

We where told we weren’t allowed to interact with the players. We had different arrears before the match so never saw them match days.
Sometimes we did publicity events and photos (I have been told that I am on a large photo with Mark Maclure at Carlton somewhere) so we got to be around them for things such as this and from memory they were all lovely.
We also went back to the club (not quite sure what it was but I think something to do with Carlton, it was near the grounds) and the players would sometimes arrive. I was still very young and there where several older girls maybe looking a little harder than me for some romance. Funny story was I had been asked out by a footy player and I said no, my brother nearly killed me. I just wasn’t really ready for anything like that.

You have obviously kept your passion for dancing, can you tell us what life was like post Blue Birds and what you are up to now?

Danced a little after this stage but stopped doing professional dancing as I found the lifestyle too hard to manage. It is a really bitchy industry and if you aren’t a little hard and pushy it is hard to get anywhere on talent alone.
I married quite young (19) and started a family. I have 2 beautiful teenagers Emily and Benjamin. I taught for several years when my children were young and realised I loved to pass on my passion and see kids enjoying and accomplishing movement and dance.
I studied young children in dance and movement and perceptual motor programs as there was nothing in my area for young children. This helped me start my own business.
The studio has been running for around 10 years but progressively altered from a part time job to a full time studio. We cater for all ages from 18months to adults and teach a range of styles. I still love what I do.
Studio Details - www.firststepsdancestudio.net.au