Not the fiery encounter everyone remembers, that one occurred one year later. Although there were quite a few fights during the game, as with the 1987 game North Melbourne were playing to win and Carlton had a more relaxed attitude to the game.

Col Kinnear stood in for Robert Walls as coach.

This was the second time Bruce Doull had played on the Oval, the previous time amazingly was 14 years previous on the Blues 1972 World Tour.

Bruce Comben acted as goal umpire for this match with several close decisions kicked by North Melbourne players given as points.

The true stars of this event were the crowd of Aussie ex-pats who entertained with mexican waves, climbing goalposts and games of stacks on the mill during breaks in play.

This match marked the league's willingness to experiment with sanctioned overseas exhibition matches. Perhaps comforted by playing in the shadow of a gasometer, the Kangaroos won by eight goals. 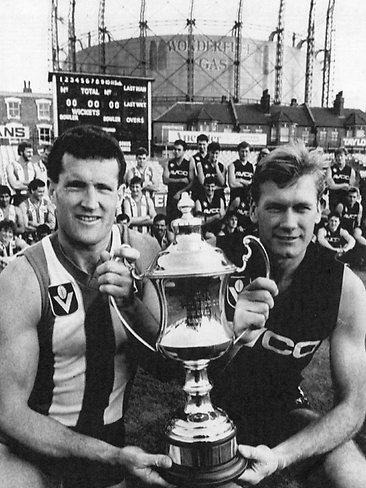