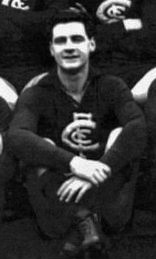 
Inglis is pictured in a 1951 Reserves team photo. CFC image

When rover Adam Inglis kicked five goals in his first senior match for Carlton in 1951, he was headline news. (He kicked the first three goals for the Blues) But after only one more game the following week (in which he didn’t score) he was omitted from the team and never played at the top level again.

Inglis was picked up by the Blues at a tender age from Melbourne University, having originally played for Williamstown Methodists. He showcased his potential in Carlton’s 1948 Under 19 Premiership side, but it took him another two seasons to work his way up through the Reserves. Eventually, he was given an opportunity at senior level against Richmond in round 3, 1951. Sharing the roving duties with Bruce Comben that afternoon, Inglis spent most of the match in a forward pocket, where he pounced on every opportunity and kicked accurately in a dream start to his career. Although Richmond beat the Blues by 24 points, Inglis’s effort in booting five goals on debut in a losing side was just as big a story.

In the next game against Geelong at Kardinia Park, both sides had the same number of scoring shots, but the Cats’ better accuracy got them home by four goals. This time, Adam was completely nullified by the Geelong defence, and as a consequence was omitted from the team the following week. After that he wasn’t able to earn a recall before the season ended and he was informed that his services as a Carlton player were no longer required.

Inglis did, however, end his time at Princes Park on a high, when he played his last match in the 1951 Reserves Grand Final in front of 84,000 people at the MCG. Carlton Reserves beat Essendon Reserves by 12 points that afternoon, and Adam finished his career as a Blue with something special to tell his grandchildren about.

Soon after departing from Carlton, Inglis was cleared to Footscray, but did not manage to another senior game.