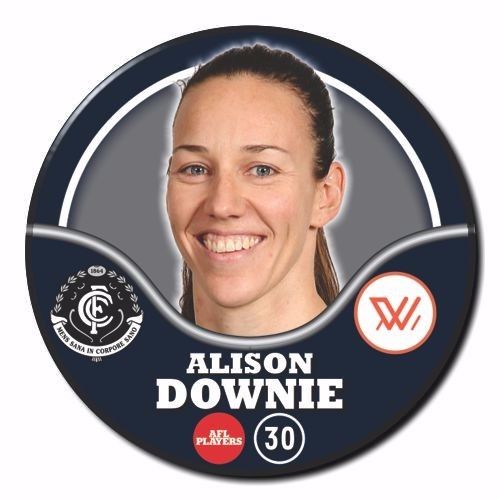 Standing at 188cm tall, Alison Downie will be an imposing ruck for Carlton in the inaugural competition. Hailing from a basketball background, Downie has been playing senior football for five years and was named in the 2016 VFL Women’s Team of the Year. Senior women’s coach Damien Keeping says Downie’s elite tap work will allow the Blues' midfield first use of the ball. “Alison is a proven ruck whose tap work is second to none, the midfielders will love her,” Keeping said. “She can also effectively read the play and her positioning behind the ball will help repel the opposition’s forward ball movement.”

In June 2021, Downie was delisted by Carlton and was subsequently signed by Collingwood as a delisted free agent for the 2022 season.

Alison always thinking team
Carlton ruck Alison Downie still dons rainbow-painted nails from last week’s Pride Round as she sits down for an interview before training this week. Unlike Downie’s nail polish, it wasn’t a particularly colourful match for the Game Changers, who suffered the biggest loss in AFLW’s short history to the Bulldogs at Whitten Oval on Friday night. While the immediate reaction was disappointment, Downie assures that she and her teammates won’t be dwelling on the negatives. “Initial thoughts were that we were very disappointed in our efforts. Obviously, the Bulldogs played a good game, but we probably weren’t as prepared for the intensity as we could have been,” Downie said. “But we’ll learn from that and we’ll grow and take that into to Adelaide this week.” The loss is a far cry from the victories the Game Changers collected in the first two rounds of the AFLW season. However, team morale has suffered no long-term hit, Downie said. “Everyone was a bit flat on Friday, but we came in for recovery on Saturday and the girls were up and about. It’s one of those things where you dwell on it for a little bit, and you’ve got to feel that hurt, but then you need to move on and focus on what we can do,” she said. “So morale was really good on Monday night, and training was probably one of the best trainings we’ve had. “We’ve taken away that we know what we can do, and we didn’t produce that on Friday night, so we’ve drilled those little things in this week at training. “That’s what we’re going to take into Adelaide. We know what we can do, and we’ve produced it in the first two weeks, particularly against GWS. “We’ll go back to what we’re good at and what we know we can do and get it right. Senior coach Damien Keeping made his return in Round 4, after being out with illness for the previous two rounds and Downie said the stability amongst the group would be important again leading into this weekend’s clash. “It’s not that we weren’t up and about without him. That first week we managed really well, and we had ‘Ruts’ (Nick Rutley) who stepped in straight away, but it’s sort of just that unknown. “We weren’t sure how he was and that was really difficult on the girls, so to have him back and to have him well has put a lot of the girls’ minds at ease. “Keeping’s message has more been to focus on your strengths over weaknesses. He points out those individual strengths of all the girls, so they know what they bring to the team and they know what they can focus on. “The review was pretty brutal, but sometimes it needs to be, so we know where we’re at. “But it wasn’t good enough on Friday, so we will bring our A-game this week.” The Game Changers are heading over to Adelaide for their match against the Crows at Norwood Oval this Saturday. The last time the two teams clashed, the Blues failed to catch Adelaide with a narrow three-point loss. Both teams will be hungry for the win, Downie said. “They’re a very tough, aggressive team. We had that close game last year," she said. “They lost a couple of games early on, and now with Erin Philips being back in their team, they’ve got that fire in the belly. That and they drew last week so they’ll have even more fire in the belly to get a win. “But what we need to do is focus on what we’re good at, and what we’ve been practising for the last few weeks. We didn’t produce that on Friday, but we think we’ve got the game plan that’ll beat them, as long as we stick to that game plan. “But they’re going to come firing at us, so we should be ready.” Fortunately, forward Tayla Harris will be back in this week’s side, after missing Round 4 through suspension for a striking incident in Round 3’s clash against Brisbane. Forward Georgia Gee, midfielder Lauren Brazzale, defender Danielle Hardiman and midfielder Katlie Loynes – who were all out for last week’s match – return to the primary list this week. However, the Blues will have to continue to cover for the significant loss of captain Bri Davey in their backline, who was ruled out for the season with an ACL injury in Round 2 against GWS. “It’s not easy and we had a couple of late withdraws right before the game, but still it’s no excuse to not put in 100 per cent,” Downie said. “It’s unfortunate but we have the girls that can cover those positions. We just need to be switched on. “But we should have a few girls back in, and a couple that were out for illness just before the game, so we have the depth, we just need to bring it together.” Downie contributed a respectable nine disposals, five contested possessions, and equalled Gabriella Pound for the most one percenters (three) for Carlton last Friday night. And now this week, between work and training, Downie has plans to have her nails redone before Round 5. “For the first round I had navy blue and white, so I’ll probably do that again, and keep them navy blue and white to finish off the season with,” she said. If she did manage to find the time, Downie will be donning blue and white polish by now, in time for the game against Adelaide tomorrow night. Like Downie’s nail polish, the ruck is focussed on one thing and one thing only: her team – the navy blue and white. - Lucie Jamison, Carlton Media.