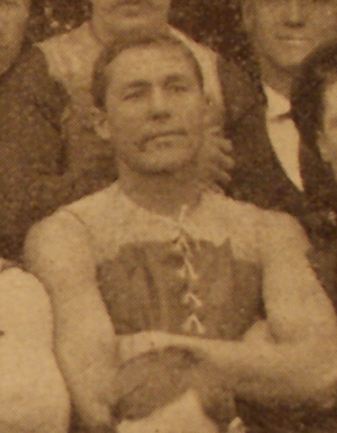 Bill Collins was very much a mature-age recruit when he joined the Blues from Rutherglen Rovers at the age of 28, midway through the 1899 season. A robust follower, he proved his worth in only his third game, when he led Carlton’s rucks in a big victory over St Kilda at Princes Park.

Bill played out that year, and returned home to northern Victoria at season’s end. The Blues stayed in touch however, and late in 1900 he was persuaded to give VFL football one more shot. He came back for the last three games, only to finish up for good after Essendon thrashed Carlton by 85 points in the last match of the season.

Of his debut game The Age (Monday 24) said; "Carlton have picked up a really good man in the Rutherglen wine-grower Collins. He is a fine, big, swarthy fellow of 6ft., and he well justified his reputation by following well all day."
Punch (July 27) said Collins was the best man on the ground and compared his impressive debut with that of Melbourne player Fred McGinis back in 1897.