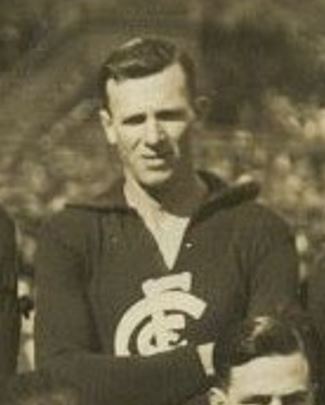 A durable follower from Rochester in central Victoria, Bill Lever played thirteen games straight in his debut year with the Navy Blues, including two heart-stopping finals. But after only one more appearance, he departed from Princes Park at the height of the Great Depression in 1930.

Lever wore guernsey number 24 on debut for Carlton in round eight of 1929, partnering Charlie Davey in the first ruck against Melbourne at the MCG. The Blues won decisively that afternoon, and Lever impressed enough to hold his place in the side for the rest of the year. He kicked his only career goal in a convincing home-ground win over Richmond in round 13, and experienced the thrill of finals football for the first time when Carlton fought hard to beat St Kilda by 8 points in the first Semi Final.

That win set up a Preliminary Final clash with Richmond the following week. The Blues went into the game with confidence, and seemed destined for victory when they led by 13 points with ten minutes to go – but Richmond rallied, and their star full-forward Jack Titus broke every Bluebagger’s heart when he kicked a great pressure goal right on full time to get the Tigers home by six points.

Meanwhile, off the field, Australia and most of the world was in the midst of an unprecedented financial crisis. The American and European stock markets had all but collapsed, staple goods were in short supply, and one in five men were unemployed. For hundreds of Victorian families, VFL football was the primary source of income, and places in every team were fiercely contested.

Yet on the odd occasion when a player was offered the security of permanent employment, most of them took it – and this seems to have been the case with Bill Lever. After playing his fourteenth and last game for the Blues in a satisfying 69-point demolition of Richmond at Princes Park in round 2 of 1930, he disappeared from the club records.

All that is known of Bill from then on is that he lived in Thornbury for at least the next decade, that he served with the Volunteer Defence Corps for four years during World War II, and that he passed away in September 1986, aged 82.