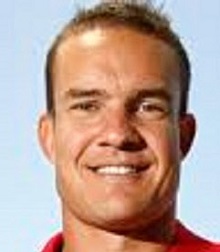 Originally from Launceston, Tasmania, Brad Green was an outstanding junior sportsman who captained the Australian Under-15 cricket team, and was invited to trial with UK soccer giants Manchester United before he chose Australian Football as his priority and went on to a distinguished 254-game career with the Melbourne Football Club. After retiring from the playing field, he joined Carlton as a development coach ahead of season 2013.

Green’s career highlights at Melbourne included playing in nine finals (including a Grand Final in his debut season) and winning Melbourne’s Best and Fairest in 2011. That same year he also captained the Demons, and led Australia’s International Rules team for the series against Ireland.

At Princes Park, he formed a close professional relationship with senior coach Mick Malthouse, and in 2014 was given the big responsibility of forward line coach. However, Malthouse’s tenure at Carlton was not a happy one, and in May, 2015 he was sacked by the board.

Green remained in his position until the end of that season under caretaker coach John Barker, but decided to move on in the wake of Brendon Bolton’s appointment as Malthouse’s successor.