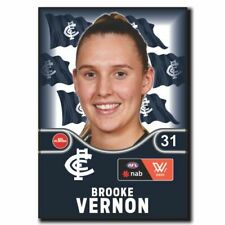 A courageous defender from the Dandenong Stingrays, Brooke Vernon officially became a Carlton player when she was selected with pick No.26 in the 2019 NAB AFL Women’s Draft. Formerly a forward, Vernon relished a new role down back in 2019, performing a role on taller or smaller opponents with aplomb. Equally as adept at shutting down her opponent as she is rebounding from defence, Vernon’s ball use by foot is one of her strengths.

After leaving Carlton in the off-season between the 2022 AFL Women's first season and the 2022 second AFL Women's season, Vernon was drafted by the Western Bulldogs.