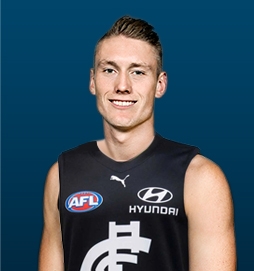 
One of the four players invited to train with Carlton during the preseason for Carlton's final rookie spot on their 2020 list.
Worn number 47 in the practise match against Collingwood at Ikon Park, Princes Park on February 20 and then in the Marsh Series game against Fremantle at Mandurah, WA on February 29.

Callum made his League debut for Richmond in 2016 wearing number 36 during Round 22 against St. Kilda and scored a goal then played the following week in Round 23. His last 6 games for Richmond were all in 2018 between Rounds 10 and 18 and scored 2 goals against Essendon (in Rd 11) and Adelaide (Rd 16) and played against St. Kilda in Rounds 10 and 18.
He was drafted by Richmond in the 2016 Rookie Draft as a 1st round selection pick 12 and was elevated to their senior list at the end of 2018 season.
Between 2016 and 2019 he played for Richmond's VFL side were he played 55 games and scored 63 goals. He was named in their best players 10 times and was a member of their 2019 VFL Premiership side. A versatile forward with four years of experience at the elite level, Moore played eight games for Richmond since being drafted prior to the 2016 season. Possessing an impressive vertical leap and a strong pair of hands, Moore - who is capable of playing at either end - plays taller than his 193-centimetre frame suggests. His best AFL performance came in the 2018 Dreamtime at the ‘G, where he collected six marks and had five shots on goal.

Carlton informed a further four players in late November that they will not be offered new contracts in 2021. Harrison Macreadie, Callum Moore, Fraser Phillips and Cameron Polson were told that their playing contracts will not be renewed, joining fellow delisted players Hugh Goddard, Darcy Lang, Finbar O’Dwyer and Ben Silvagni.