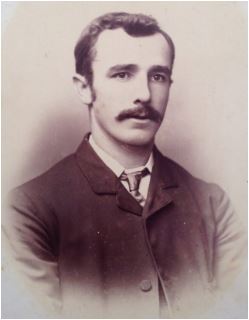 C or G. Carter, "G" may have been a newspaper misprint.

A descendant of Charles Carter has contacted Blueseum and the family history believe Charles was a captain of Carlton. He may have been a captain of the Second Twenty, but details of this competition are sketchy to say the least.
The family has provided Blueseum with this great photo and with the following details;
Born circa 1866
Married Sarah Jane Rodway
Played cricket with the Elgin Union Cricket Club 1880 - 1881.
This would most likely to have been a local Carlton suburban club, named after Elgin Street. (Lord Elgin of the Elgin Marbles fame.)


Charles passed away at the early age of 32 years leaving behind his wife Sarah, a son and a daughter.
Charles' son, William Watson Carter was killed on April 25 1915 on the first day of the landings at Anzac Cove Gallipoli.
After Charles' death Sarah moved to Traralgon and opened a dress shop which was later relocated and is still standing at Old Gippstown in Moe.

1885 March 27
At the Carlton AGM the club presented a medal to Second Twenty player C. Carter for season 1884.

At the Carlton AGM April 05 1889 the Secretary of the Second Twenty, a Mr. C. Carter, was presented with framed photographs of the 1888 Second Twenty team which tied with North Melbourne for the Premiership.