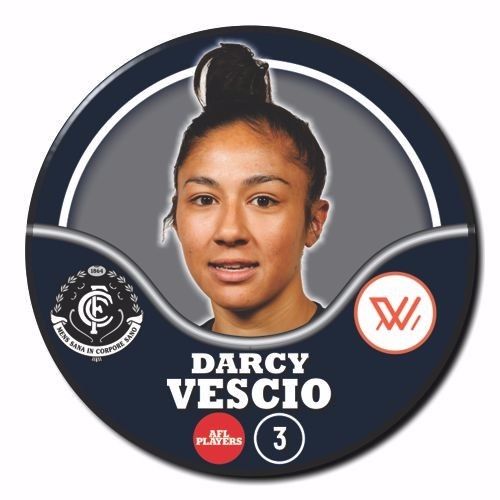 Carlton’s forward line is in safe hands, with Darcy Vescio joining the Blues women’s team as a marquee player. The 23-year-old full-forward started playing footy when they were five with their brother, going on to win three VWFL premierships with the Darebin Falcons and representing the Victorian state team on two occasions. After being selected with pick three in the 2014 draft, Vescio has played for the Western Bulldogs for the last two years. They are known for their clean hands and regularly puts theirself in dangerous positions, making them a handful for opposition defenders. Vescio has been referred to as a "household name" in Australia by ESPN.

Vescio stopped playing competitive football at the age of fourteen, when they were no longer allowed to play with the youth boys team. Vescio started playing again at the age of eighteen, when they moved to Melbourne from their home town of Wangaratta and joined the Darebin Falcons in the Victorian Women's Football League (VWFL). They won premierships with the club in four consecutive seasons from 2013 to 2016, and won best on ground honours in two of these matches in 2015 and 2016. Vescio has represented Victoria at the AFL Women's National Championships in 2013 and 2015. They were drafted by the Western Bulldogs in 2014, and played for the club in exhibition series matches between 2014 and 2016. Vescio works part-time at the Carlton Football Club four days a week as a graphic designer. They were responsible for designing the club's inaugural women's guernsey.
They were born and raised in the Victorian town of Wangaratta and attended school at Wangaratta High School. Vescio is of Italian and Chinese heritage and is an AFL Multicultural Ambassador.

Vescio made their debut in round 1, 2017, in the club and the league's inaugural match at IKON Park against Collingwood. They kicked a game-high four goals in the match, which was more than Collingwood's overall team score. This was acknowledged by the AFL Players Association, highlighting Vescio as Player of the Week. At the conclusion of the 2017 season, Vescio was the AFLW leading goalkicker, was nominated by her teammates for the AFLW Players’ Most Valuable Player Award, and was listed in the 2017 All-Australian team. Their mark in front of goal in round five against Western Bulldogs was voted by fans as Mark of the Year. Carlton signed Vescio for the 2018 season during the trade period in May 2017.


Vescio's trust in teammates
Darcy Vescio has quickly cemented themself as a fan favourite amongst Carlton supporters and football fans alike. Picked up by the Blues as a marquee signing, Vescio has proven their worth in the first three weeks of the inaugural NAB AFL Women’s season, with a starring role in Carlton’s emphatic 35-point win over the Magpies in front of just under 25,000 at Ikon Park. Vescio was unsure of what to expect when things got underway for the girls at Carlton, but was pleased when they saw their teammates gel quickly. “It’s been brilliant getting to know the girls and getting to experience what it’s like being on their team,” Vescio said. “There’s a couple of girls I always battle with at a local level so getting to play with them and getting to know those girls has been a unique experience.” The Blues have been lauded for their team performances, and for how they work on field as a unit. Vescio puts this down to the girls being so accommodating and open with one another. “From the beginning we’ve understood that we need to get to know each other quickly. It’s been good to see how the girls are getting to know each other on the field and off it,” Vescio said. “I think that’s definitely translating on the field. Footy’s all about putting your body on the line and doing something for someone else so if you trust them and you have a lot of belief in what they can do then you’re going to perform even better.” Despite the loss to Adelaide in Round 3, the Blues still find themselves in a favourable position just before the halfway mark of the season. Vescio acknowledged the challenge that lies ahead for the girls. “We’ll have to bounce back strongly. Melbourne is obviously coming into the game with a lot of momentum,” they said. “As much as it sucks losing, there’s no time to dwell. We’ve taken a few areas to improve upon and we’ll just have to try and burst into action straight away.” The last few weeks have shown fans of the AFLW how evenly matched the eight teams are. Despite the uncertainty around results, Vescio believes their teammates have what it takes to push any side. “We have to work harder now to get where we want to be. We’re still in a great position in the competition. Obviously Adelaide (1st) and Brisbane (2nd) have the best position at the moment but we’re still in reach,” she said. “Because the games are so short you can win the game in the first half if you score quickly, because it is difficult to come back once you’re a couple of goals behind.” Aside from starring on-field for Carlton, Vescio has also been busy in the media spotlight as one of the game’s star attractions. But it’s a responsibility the Blues' No.3 has embraced. “It’s (the AFLW) sort of thrusting female athletes into the mainstream media and it’s just having so much reach,” Vescio said. “Once you see women doing it, you’re like, ‘Oh, I can do that, I’ve always wanted to do it but I never thought it was something for me’. It’s just instilling so many women with confidence.” Visit the Carlton AFLW hub for more player features, videos and more While playing footy is still the ultimate focus of Vescio and their teammates, shouldering the responsibility as a role model while still taking in the overwhelming amounts of support is also a priority.“It’s a pretty beautiful time to be involved in the game - the fact we get to experience the inception and how it’s received by the public,” they said. “I feel really lucky to be here, but I suppose the girls that get to be involved 20 years down the track will be even luckier. The players now deserve to be heroes, and all the little girls out there playing now deserve to have role models.” Carlton takes on Melbourne in Round 4 AFLW action at Casey Fields from 11:35am on Saturday. - Lucy Watkin, Carlton Media February 22, 2017


AFLW night of nights
The AFL will recognise the best performers of the inaugural AFL Women’s competition at the first W Awards on Tuesday evening. Held at Peninsula, Docklands, the black-tie function will see the first ever female footballer awarded the best and fairest player of the women’s league. After being crowned the Herald Sun’s 2017 AFLW Player of the Year, Carlton’s Brianna Davey is set to be a strong contender for the competition’s greatest honour. As a consistent performer for the Blues in 2017, Davey demonstrated her elite sporting skills across the six games she played and is expected to poll well at tonight’s inaugural W Awards after she finished the season with an average of 19 disposals. The ceremony will also award fellow Blues marquee Darcy Vescio as the league’s leading goalkicker after she booted 14 goals across the seven-round competition. With the winners of the Woolworths Mark of the Year and Coates Hire Goal of the Year also to be revealed, Vescio could take home a second accolade if her Round 5 grab received enough votes from the public to top the marks of Adelaide co-captain Erin Phillips and Lion Tayla Harris. The first NAB AFL Women’s Rising Star will also be announced during the ceremony as well as the Virgin Australia AFL Women’s All Australian Team of 22 players. Fans can watch the W Awards live on afl.com.au or via the AFL App from 6:30pm AEDT. - By Jacqueline Guldon, Carlton Media

Vescio's awards double
Carlton’s AFLW cult hero Darcy Vescio has capped an outstanding season by taking out the AFLW's Mark of the Year and Leading Goalkicker awards. Following consistent performances throughout the competition’s inaugural year, the excitement machine managed 14 goals over the seven-week season. “I’m so grateful to have the opportunity to thank those who have been part of the journey,” Vescio said. “As for the award itself, most of my goals are the result of the team working extremely hard, so for me I’ll be looking forward to celebrating it with them." Vescio finished three goals ahead of Adelaide’s Sarah Perkins (11) and four goals ahead of Adelaide’s Erin Phillips (10). The 23-year-old's dominance on the field was eminent from the Round 1 clash that saw her score four goals in the side's historic victory over arch-rival Collingwood. I’m incredibly proud of all that we’ve achieved this year,” she said. “We’ve dealt with highs and lows and I feel that these experiences have developed and strengthened our bond... I’m looking forward to next season already.” Vescio took home the AFLW Mark of the Year, voted by fans, with her memorable goal-line mark in the Blues’ Round 5 victory over the Western Bulldogs. She was also the Blues' top vote-getter in the AFLW Best & Fairest - the equivalent of the Brownlow - polling seven votes to finish fifth overall. - Carlton Media


Vescio third in AFLWPA MVP
Carlton’s Darcy Vescio and Brianna Davey have featured within the top polling players of the AFL Players' Association awards announced on Monday. Selected by Carlton as marquee players in 2016, Davey and Vescio were stand-out performers of the Blues’ squad in the inaugural AFLW competition and have managed to make an impression on their league counterparts. As the season’s leading goalkicker, Vescio tallied 132 votes to finish third in the peer-voted Most Valuable Player award taken out by Adelaide co-captain Erin Phillips on 204 votes. Davey – the Herald Sun’s 2017 AFLW Player of the Year – received 57 votes in the Most Courageous category to finish second behind Phillips’ fellow Adelaide co-captain Chelsea Randall on 80 votes. Melbourne utility Daisy Pearce was awarded the league’s Best Captain after she totalled 63 votes. Every AFLW player will be invited to the AFL Players’ MVP Awards in September later this year to celebrate the 2017 male and female award winners. - Jacqueline Guldon, Carlton Media

Double honour for Darcy
Carlton’s star forward Darcy Vescio has claimed two honours at the 2018 VFL Women’s Awards at Crown Palladium on Monday evening. As the league’s leading goalkicker, Vescio received the Rohenna Young Medal, while also being named at full forward in the VFLW Team of the Year. Booting 26 majors in nine matches, the 25-year-old kicked a goal in every game she played, including two bags of four against Geelong in Round 4 and Williamstown in Round 11. Entering the final round of the season one goal behind Darebin’s Hannah Mouncey, Vescio showcased her exceptional talent around the sticks, kicking a nine-goal haul against Essendon at Windy Hill. The nine-goal bag secured her the top goal kicking honour, and no doubt caught the eye of those voting for the VFLW Team of the Year. Carlton will hold its inaugural VFL & VFLW joint best and fairest this Friday night with the Northern Blues at the Mantra Bell City Ballroom in Preston. - Danielle Balales, Carlton Media