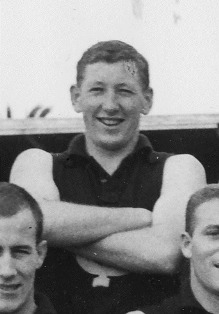 The son of former North Melbourne defender Joe Rogers, David Wallace (Dave) Rogers was a capable, if somewhat lightweight full-back who played seven matches for Carlton in 1963-64. Hailing from East Coburg, Rogers was a reluctant recruit at first, because he would naturally have preferred to join the Shinboners. However, because he lived in our recruiting zone, the Blues had first call on his services.

Rogers wore guernsey 29 in his debut game for Carlton against South Melbourne at Princes Park in round 14, 1963 and had rather an easy day of it. The ball spent most of the match at the other end of the ground, while the Blues posted a ten-goal win. Things got a bit more hectic after that, with a six-point victory over Essendon in round 15, followed by a 7-point loss to Richmond the following week. Then in round 17, the Blues travelled to Kardinia Park and copped a real hiding from Geelong. Trying to stop a run of Geelong goals late in the game, coach Ken Hands swung his team around, and Rogers took a good mark deep in the forward line. He kicked truly, and posted his first and only major score for the Blues.

Dave waited until round 7, 1964 for his next senior opportunity, and although Carlton beat Fitzroy by a point, he was omitted again the following week. He was back at full-back for the last two games of the season, which finished on a rare positive note when the Blueboys crushed Fitzroy by 80 points on their home turf in round 18.

Shortly afterwards, Rogers asked for a clearance to North Melbourne, and Carlton’s match committee didn’t stand in his way. Dave headed off to Arden Street, where his career paralleled his time at Carlton. He played nine games and kicked two goals for the Roos in 1965-66, and finished his VFL career with 16 games in four seasons.

Rogers was one of North's better players in their Rnd 2 1966 loss to Essendon.