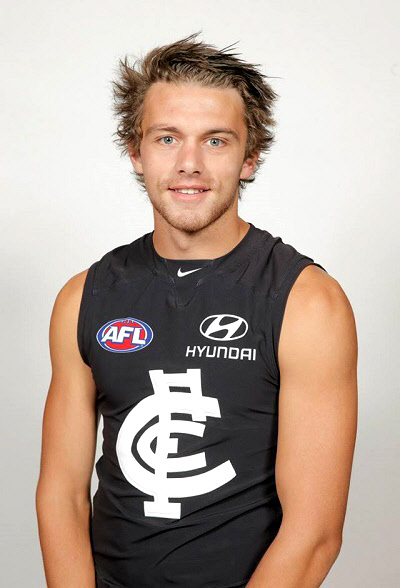 A local product who had developed his game at Bacchus Marsh and Hoppers Crossing before joining the Western Jets in the national Under-18 competition, Dillon Viojo-Rainbow came to Carlton via the 2014 National Draft at selection number 28. Soon nick-named ‘DVR’ or ‘Skittles,’ he was a quick and clever left-footer who averaged 13 possessions at 73% efficiency in five matches at the 2014 Under-18 Championships, and 17 disposals in 12 games for Western Jets at TAC Cup level.

After training well over summer, Dillon was selected for a pre-season round 1 NAB Cup Challenge match against the West Coast Eagles at Mandurah, WA in February, 2015, but that was to be his only experience of senior football for the Blues. He spent all of that season, and the next - at VFL level, but despite some handy efforts, couldn’t earn promotion to the senior side and was delisted in October, 2016.

Viojo-Rainbow would line up with VFL club Port Melbourne for the 2017 season. He was a part of their Premiership victory in 2017.
In 2018 Vojo-Rainbow played 10 games in the VFL and six games for Doncaster East in the Eastern Football League where he would play in a premiership.
in 2019 Dillon Viojo-Rainbow will be making a return to the west in 2019 and is set to play with WRFL team Werribee Districts this season (2019), he would also line up for VFL team Footscray in the VFL, in 2019 whilst playing with Footscray he would nominate for the 2019 Mid-Season Rookie Draft in hope to rekindle his AFL career.

in 2022 Viojo-Rainbow would win the Barry Priest Medal as the Best & Fairest in the WRFL whilst playing with Werribee Districts.