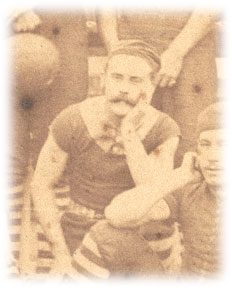 
A Carlton footballer from an old players match in October 1881
Could this be Paddy Gunn?

Frederick William Gunn.
Born in Ireland and came to Australia as a young lad. Paddy was schooled at Scotch College from 1870. He played with the Southern club in Albert Park along side team mate and fellow Blue George McGill.
Crossed from the East Melbourne club which became defunct at the end of the 1876 season.

1877 One of the most active little players in the metropolis, unique at dodging, and full of puzzling antics; very quick on his feet, and a good kick; au especial favorite.
(The Footballer 1877. p35)

(The History of the Carlton Football Club. Brian Hansen. p37)

1878 Has not played regularly owing to illness, but always gave evidence of skill in many departments of the game. Still retains his cunning.
(The Footballer 1878. p31)

1879 As a dodger, is certainly unequalled; an adept at "little marks", and particulary dangerous when near his adversary's goal. Has fully shared the honors with his more stalwart companions.
(The Footballer 1879. p29)

With a brilliant run,

Humbugging the players with lots of fun -

A broth of a boy is his mother's son!

What more exciting than Paddy's charge

On Sillet, of Melbourne, twice as large?

1923 July 6 (p4)
"Old Boy" of The Argus wrote about the best footballers to have played and mentions Paddy Gunn amongst the Carlton champions of the early 1880's.

1924 July 31 Thursday
The Argus' "Old Boy" said of Paddy;
"Very small but as slippery as an eel, Gunn's cleverness with his feet and in dodging made him a champion. In business he was a commercial traveller, and his Irish wit and genial smile made him a most popular man 'on the road.' He retired many years ago. He had been in ill-health for some time, and died in the Alfred Hospital on Tuesday evening. He leaves a widow, two sons (both members of the A.I.F.) and two daughters. The funeral will take place today."

The Hobart Mercury reports on the death of "Paddy" Gunn.
To read the newspaper's excellent obituary, click here> http://nla.gov.au/nla.news-article23754353